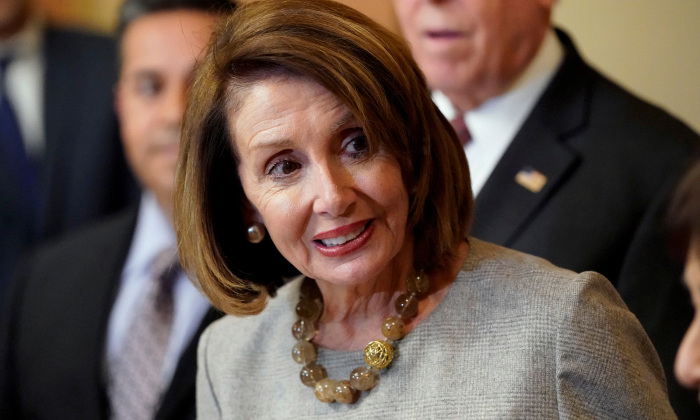 Speaker of the House Nancy Pelosi (D-CA) arrives to sign legislation during an enrollment ceremony before sending it to U.S. President Donald Trump for his signature to end the partial government shutdown on Capitol Hill in Washington, U.S., Jan. 25, 2019. (Joshua Roberts/Reuters)
Politics

According to a CBS/SSRS poll, 38 percent of voters think Democrats should keep digging into Russian collusion allegations, while 58 percent said they should “drop [it] and move on to other issues.” Four percent said they didn’t know.

According to a Rasmussen poll of 1,000 respondents done March 25-26, 61 percent said congressional Democrats should move on to other issues, while 29 percent said they should keep investigating.

Americans were divided on whether the Mueller report, which looked into potential collusion between the Trump campaign and Russia, as well as obstruction of justice by President Donald Trump, had cleared Trump, according to the CBS/SSRS poll. Some 34 percent said it cleared him, 23 percent said it did not, and another 34 percent said it was too early to say.

Mueller’s report, according to a letter by Attorney General William Barr, did not find collusion between the Trump campaign and Russia, but it did not take a position on whether Trump obstructed justice. Based on the evidence that was provided by Mueller, Barr and Deputy Attorney General Rod Rosenstein concluded he did not.

More Americans think the report was done fairly (44 percent) than unfairly (10 percent) but many (40 percent) said it’s too soon to say.

“It’s a shame that our country had to go through this,” Trump said on March 24 in Palm Beach, Florida. “And it began illegally. And hopefully, somebody is going to look at the other side. This was an illegal takedown that failed.”

A majority of Americans agree with him, according to the CBS/SSRS poll, with 54 percent saying they believe the probe was politically motivated, while 37 percent said it was justified.

Meanwhile, Congressional Democrats have called for not only the full report to be released to the public but all the underlying documents associated with the investigation as well.

“The Special Counsel’s investigation focused on questions that go to the integrity of our democracy itself: whether foreign powers corruptly interfered in our elections, and whether unlawful means were used to hinder that investigation.  The American people have a right to the truth,” House Speaker Nancy Pelosi (D-Calif.) and Senate Minority Leader Chuck Schumer (R-N.Y.) said in a joint statement on March 22.

AG Barr’s letter raises as many questions as it answers. The fact that Mueller’s report does not exonerate the president on a charge as serious as obstruction of justice demonstrates how urgent it is that the full report & documentation be made public without any further delay.

One thing most Americans, 77 percent, agree on, according to the CBS/SSRS poll, is that the full report should be released.

Trump has also said he wouldn’t mind if the full report is released but that it is up to Attorney General Barr as to how much of it should be.

Barr has said that anything related to grand jury testimony, ongoing investigations, U.S. intelligence, or the reputation of peripheral third parties will be redacted.

He expects to make the report public by mid April, and said it will not be previewed by the White House before it is released.

“Although the president would have the right to assert privilege over certain parts of the report, he has stated publicly that he intends to defer to me,” Barr wrote.

The CBS/SSRS poll was conducted March 25-26 by a sample of 1,002 people via telephone, and has a 4 percent margin of error.