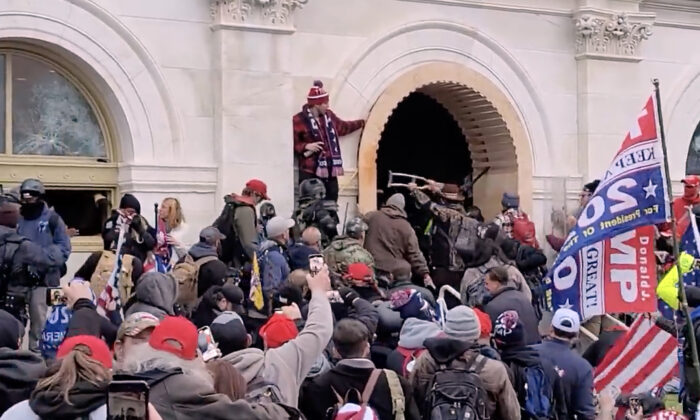 A man points down to where Rosanne Boyland and others tumbled after being pushed from the Capitol tunnel on Jan. 6, 2021. (Screen Capture/via The Epoch Times)
Viewpoints

A few days ago, I got an email from a fact-checker at PolitiFact. His name is Bill McCarthy. He said he was checking a quotation from me taken from my appearance on the “Ingraham Angle” on Fox News. We had an exchange of emails that gives a very interesting window into the otherwise obscure world of fact-checking.

So I’d like to track our correspondence, because, after all, these are the kinds of checks that get people tagged, restricted, and even banned on social media.

Here’s what I said on Fox: “If you follow Jan. 6 at the granular level with the facts that are coming out slowly, they are coming out because the government has been very reluctant to release footage, particularly footage of what happened in the tunnel on Jan. 6, where you now begin to see these cops using massive amounts of force against unarmed Trump supporters, including women. The death of Rosanne Boyland is now being called into question. Was she the second Trump supporter that was killed by the authorities?”

McCarthy asked me to corroborate the facts alluded to in my statement, so I sent him a series of videos from inside the tunnel on Jan. 6, videos that are shocking in their display of violence on the part of the authorities, and which feature Boyland’s lifeless body. I also mentioned to McCarthy that attorney Joseph McBride, who represents a Jan. 6 defendant, has filed court briefings about the extreme violence used against protesters in the tunnel.

McCarthy wrote back, asking whether I denied that there were armed protesters at the Capitol on Jan. 6.

“You’re misstating what I said,” I replied. “I never said no one in the entire crowd on January 6 was armed. If you read my quotation it applies to the violence in the tunnel, and I specifically referenced Rosanne Boyland who was unarmed. Please don’t use the deceptive practice of creating a straw man, attributing it to me, and then refuting not what I said but what you mischaracterize me as saying.”

McCarthy persisted, claiming that “court documents and video footage show evidence of violence and weapons among the rioters, including in the tunnel.” To which I replied, “If I say the Capitol Police used force against unarmed protesters like Boyland, this is not refuted or disproved by showing that other protesters were armed. This is a well-known logical fallacy.”

I proceeded to spell out the fallacy.

“Police officer A attacked unarmed protester B. Yes, but protester C had weapons.” I pointed out that “the second statement does not contradict or refute the first one.”

Did McCarthy get the point? I don’t know, but he did reach out to attorney Joseph McBride, and McBride not only confirmed that “the government has withheld video evidence of police brutality from the public and continues to do so,” but also that “dozens of eyewitness accounts” corroborate the violence allegedly used by the authorities against Boyland and others in the tunnel.

McBride noted that his own client, Victoria White, had allegedly endured an “absolutely brutal beating” at the hands of the D.C. police. He noted that another defendant, Michael Joseph Foy, filed a motion (pdf) in which he said he witnessed police brutality from the steps at the bottom of the tunnel, at which point he used a hockey stick against the police in defense of others who were being trampled.

McBride added that, as with Foy, these are “protesters, most of them men, with no criminal records or previous history of violence.”

“Men who are objectively pro-police and pro-military committed acts of violence against police that day. Why would they do that? For the ones who were on the Western Terrace, it is because they witnessed Victoria, Rosanne, and many others getting brutalized, so they came to their defense. All the men from the West Terrace have the same story, because it is true,” he said.

Was PolitiFact convinced? Of course not. Their fact-check just appeared, and sure enough, they rated my remarks “false” on their absurd Truth-o-Meter. Never mind that I provided ample documentation. Basically, PolitiFact went with its original bias, and then found sufficient tidbits to confirm it and a left-wing academic to authenticate its verdict.

In other words, they convinced themselves they were right from the outset. This isn’t real fact-checking, but this is what passes for fact-checking in our time.

I stand uncorrected. From my perspective, it’s PolitiFact’s credibility, not mine, that’s on trial here.