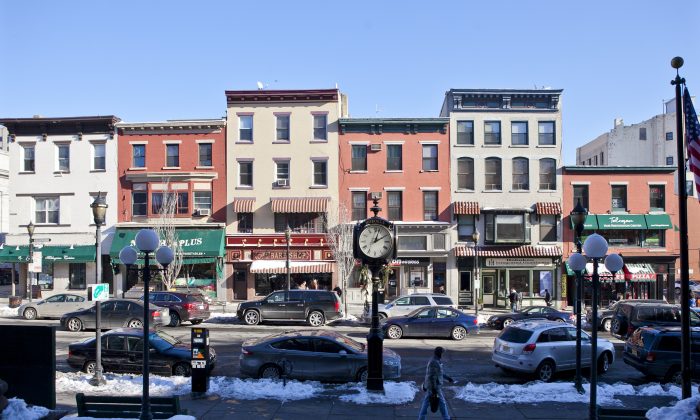 HOBOKEN, N.J.—City of Hoboken Mayor Dawn Zimmer was determined last Thursday to shift the spotlight to the flood protection she said her city desperately needs.

She was emerging from a weeklong political storm caused by her accusations that New Jersey Gov. Chris Christie threatened (through his lieutenant governor) to withhold Superstorm Sandy funds to Hoboken if Zimmer did not support a development project said to be important to Chris Christie.

Christie became front-page news after evidence revealed his aides may have ordered access lane closures to the George Washington Bridge as political retaliation to another mayor, and Zimmer’s new allegation intensified the media’s interest in the story. She too became news.

“Tonight’s about Hoboken,” said Zimmer, at a public meeting.

She was there to update a packed room of residents on the city’s plan to solve its historic flooding problems, for which they need more money from state and federal governments.

About 80 percent of the city was flooded during Sandy, and there have been four flash floods since then. Zimmer said flooding will continue unless something significant is done.

“We’re totally exposed,” she said. “Every time it rains, people are petrified.”

The picturesque, 1-square-mile bedroom community is situated a short train ride across the Hudson River from Manhattan. Home to about 50,000 people, it affords sweeping waterfront views of New York City’s skyline.

The problem is, 94 percent of the city has a surface impervious to water, which makes it extremely vulnerable to storm surges and flash floods.

The city’s protection plan is part of a federal competition for funds, Rebuild by Design. Hoboken’s proposal is 1 of 10 finalists competing for funds from the Department of Housing and Urban Development (HUD). HUD will decide in March.

Hoboken’s plan includes coastal defense, a greenbelt around the city, and water pumps to speed drainage.

Though the city doesn’t yet have a projected cost, Zimmer said the goal is to focus on partnering to get the most from every relief dollar. That could include a combined funding request with New Jersey Transit, she said.

The mayor said the city estimates there is about $100 million in Sandy-related damage. That’s about the same amount they asked for from the state from the first tranche of Community Development Block Grant funding.

“Instead of silos of funding, we are trying to create a comprehensive plan,” said Zimmer. “After every storm, we rebuild as is. We need the full envelope of protection.”

Part of the strategy is to try to qualify for a clause under the National Flood Insurance Program (NFIP) to circumvent flood insurance premiums that are set to skyrocket some time in the next year due to a change in federal law that reduces subsidies.

Zimmer said if Hoboken can demonstrate that it has less than a 0.2 percent chance of flooding, it can be a “shaded Zone X” under NFIP, and gain an exemption from flood insurance requirements.

She added that as the fourth most densely populated city in the nation, in a well-established environment, there are limited options for changing building architecture. “We can’t raise our city on stilts.”

Hoboken’s ambitious plan “could be an example for the country,” said Zimmer.

According to residents, there does seem to be a need for more help. On 1st Street, which flooded during Sandy, the recovery process has been slow and painful.

Barista Andrea Uy, who has worked at Caffe Luxxe for three years, said business today is about 50 percent what it was before the storm.

“A lot of stores [that employed] a lot of our regular customers are not coming back,” said Uy last Friday in the small coffee shop, which didn’t get a single customer in 20 minutes. Even though it was midday, there was also hardly any foot traffic on the street.

Uy said that flyers have been circulated urging people to buy local. Many shops also advertised the same message on window signs and sandwich boards. But it doesn’t seem to be enough.

“A lot of customers moved out to New York,” said Uy, pointing to a parking garage across the street that was completely flooded. “They lost a lot of money.”

Among those who have moved since Sandy, there’s a realization that if improvements in the city’s infrastructure aren’t implemented, problems will persist.

“The way Hoboken is built, it is set up to flood,” said former resident Alexandra Ruiz, who grew up in the riverside town but moved after Sandy.

“Down where the projects are, it gets flooded every time it rains.”

Ruiz said that the “city changed so much” in recent years, and it seems as though there has been nothing but “building, building.”

“Who is going to care if I talk to you?” asked an agitated Kostopoulos, pointing to a mark on his wall showing the floodwater level.

“You see this. I lost everything up to here. But nobody cares.”

Zimmer won’t comment further on allegations she made earlier in the week during her media blitz. She said in a formal statement, and again at the town meeting last Thursday, that the U.S. Department of Justice is investigating her claims and asked her to refrain from more interviews. Though not legally required, Zimmer is cooperating with the request.

In a Jan. 19 interview on MSNBC’s “Up With Steve Kornacki,” her first interview on the topic, Zimmer said she was partly motivated to come forward because of an impending second wave of federal money.

“There’s another tranche of funding coming through, and we’re not going to get it unless I move forward with the Rockefeller plan,” Zimmer told Kornacki, a former resident of Hoboken. “We’re at risk of not getting any more Sandy funding.”

Zimmer’s allegation is that getting more funding from the state is contingent on her expediting a development project for the Rockefeller Group at the north end of town.

According to the New Jersey comptroller’s office, Hoboken has already been awarded more than $14.2 million in Sandy relief funding.

But of the CDBG funding, some of which was released in early 2013, and some of which will be released later this year, the city has only gotten $50,000 out of $1.83 billion awarded to New Jersey by HUD.

The governor’s office pointed out in a lengthy response to MSNBC’s story that individual residents have also been awarded tens of thousands in CDBG funding.