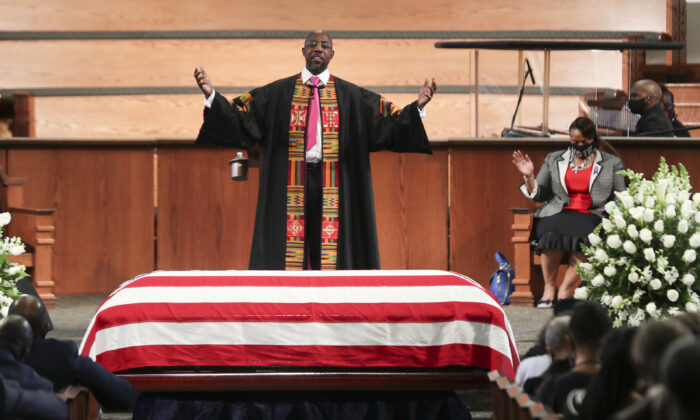 Rev. Raphael Warnock offers a benediction at the funeral service of the late Rep. John Lewis (D-Ga.) at Ebenezer Baptist Church in Atlanta, Ga., on July 30, 2020. He was elected to the U.S. Senate six months later.(Alyssa Pointer/Pool/Getty Images)
2022 Midterm Elections

It’s still early in the general election campaign, deep in the summer, when people aren’t too concerned about who should fill a Georgia U.S. Senate seat.

Should it be the incumbent, Sen. Raphael Warnock (D-Ga.), just a year and a half after a controversial runoff election victory on Jan. 5, 2021? Or should it be Trump-endorsed Herschel Walker, a former college and pro football star and political novice? People might wait until after Labor Day to think about it.

It’s a big decision. The dynamic of the U.S. Senate, now divided 50–50 between Republicans and Democrats, hangs in the balance.

The polls show Warnock slightly ahead. A recent University of Georgia poll shows him ahead of Walker by 3 percentage points, 46 percent to 43 percent. That can be spun differently, depending on who’s doing the spinning.

“Warnock is getting traction,” said Charles Bullock, University of Georgia political science professor. “His poll numbers are rising. Polling shows most people believe him to be trustworthy. A plurality doesn’t believe Herschel Walker is.”

Bullock said those perceptions have been driven by the TV ads put out by Warnock’s well-funded campaign. They show Walker saying things years ago and different things now.

“They’re fact-checking right in front of you,” he said.

For Walker, this is a new experience, according to Bullock.

“For 40 years, he was a folk hero,” he said. “Now, for the first time, efforts have been made to go through and see what he has said—things which in the past were largely applause lines. He’s a first-time candidate.”

Marci McCarthy, Republican chairwoman for DeKalb County in metro Atlanta, sees it differently. Warnock’s margin is within the margin of error, she notes, meaning that the race is a dead heat.

He’s also an incumbent polling at less than 50 percent, which is a warning sign, she said.

While he’s got money—Warnock reported having raised $85 million as of June 30, nearly four times what Walker had raised—he can’t necessarily count on party coattails to help him.

“Who’s going to come in and save the day? President Joe Biden?” McCarthy asked, noting that Biden is so unpopular, Warnock has asked him to not come to Georgia. The last time Biden was in the state, gubernatorial candidate Stacey Abrams ducked meeting with him, citing a conflict.

Trey Hood, a University of Georgia political scientist, conducted the poll of 902 likely voters from July 14 to July 22. He said the polls show steady trends: Warnock running ahead of Walker, while incumbent Republican Gov. Brian Kemp leads Stacey Abrams by 5 points in the poll.

Bullock said one Quinnipiac poll showing Warnock ahead by 10 percent is an outlier, but others steadily show him ahead of Walker by 3 to 4 points.

Both candidates have felt the influence of former President Donald Trump.

Walker’s candidacy has been boosted by Trump’s endorsement. Walker, 60, needs no introduction for most of Georgia; arguably the football-crazy state’s most illustrious football star, he won the Heisman Trophy as the nation’s best college player in 1980 as he led the University of Georgia to its first national championship.

Far ahead of his primary rivals this spring, he chose to not debate them. He won with 68 percent of the vote.

Warnock, 53, has his own distinctions. He’s the senior pastor of Ebenezer Baptist Church in Atlanta, where Martin Luther King Jr. once was co-pastor. There, Warnock officiated over the 2020 funeral of civil rights legend Rep. John Lewis (D-Ga.).

Walker has been hurt by revelations about his private life, notably three children born out of wedlock that he hadn’t disclosed before. However, Warnock’s personal life isn’t without its blemishes, notably the police report that his wife filed accusing him of attacking her and her children and not paying child support.

“He’s not exactly husband or father of the year,” McCarthy said. “I wouldn’t start throwing stones at glass houses if my own house was shattered.”

She doesn’t think Warnock’s attack ads have had much effect.

Swing Votes to Decide the Race

In the University of Georgia poll, Warnock’s lead is one of few bright spots for Democrats. Of those polled, 78 percent thought the nation is on the wrong track, while only 35 percent approve of Biden’s job performance as president. And more Georgians want the Republicans to control Congress—46 percent to 41 percent.

For the Senate race, in addition to Warnock’s edge over Walker, the poll indicated that 3 percent have opted for Libertarian candidate Chase Oliver, and 8 percent are undecided. It’s the undecided who will decide the race, McCarthy said.

“That he’s a Democrat leading a Republican this late in the game in Georgia is noteworthy,” Hicks said. “That’s considering that the Republicans held every statewide office in Georgia until Sens. Warnock and [Jon] Ossoff won last year.”

Warnock won by only 2 percentage points, so a lead of 3 to 4 points shows him gaining ground, Hicks said. And his running ahead of Abrams and having poll numbers significantly higher than Biden’s says something as well.

Hicks analyzed the Democrats’ underlying strategy in their attack ad campaign against Walker. Its primary goal is to encourage Republicans shaky on him to sit the race out, as many appear to have done in January 2021.

Warnock has the luxury of plenty of money. Democrats want to spend it now to widen his lead. If he gains ground and leads Walker by 7 to 10 points in the fall, Republicans will pull their money from his race to defend other battleground states where the races are closer. Their pulling back from Georgia also would benefit Abrams, Hicks said.

The attack ads will force Walker to debate Warnock to defend himself, something he’s hesitated to do. Warnock’s campaign is confident he would win that debate, Hicks said.

He declined to address Warnock’s personal issues or speculate what would happen if Walker attacked them with his own ads. While Warnock is ahead in hard money, money that his campaign can spend directly, the two are more evenly matched in soft money, such as money spent by the national parties supporting their respective candidates.

“Sen. Warnock is not the evil person Republicans thought he would be, and Walker is not a strong candidate,” Hicks said.

However, McCarthy said Warnock is further to the left than sits well in Georgia.

“This is more of a purple state,” she said.

Hicks noted one more Warnock accomplishment: “Republicans have historically owned faith, law enforcement, and patriotism in Georgia. Warnock, as a paster, takes one of those off the table.”