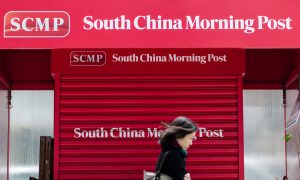 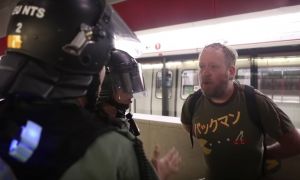 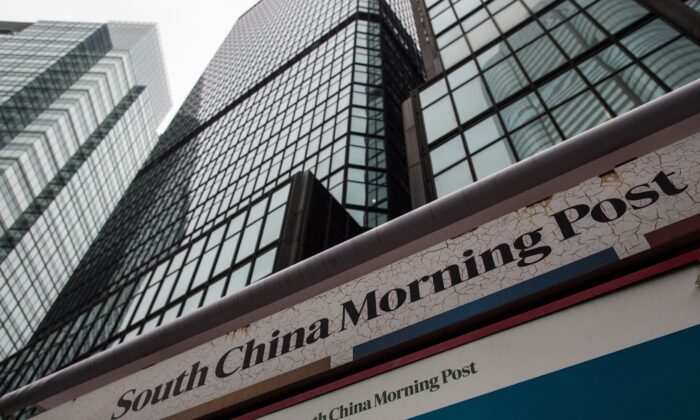 A general view shows a closed newsstand designed with the logo of the South China Morning Post (SCMP) in Hong Kong on December 12, 2015, following its acquisition by Chinese internet giant Alibaba of the English-language newspaper. ANTHONY WALLACE/AFP via Getty Images
Viewpoints

An Asian media outlet accused of alignment with the Chinese Communist Party lists Politico as a strategic partner for a scheduled China-related event in the United States, as part of a content partnership between the publications that Politico publisher and founder Robert Allbritton announced in May 2018.

That’s even though there’s been a spate of Politico coverage that’s been critical of foreign interference over the past several years.

Specifically, on Nov. 27, 2019, Politico included an ad in that’s day’s Huddle news aggregation email publicizing an event called China Conference: USA, branded by the South China Morning Post (SCMP). The Huddle ad links to a landing page, which lists the event under a banner for SCMP Events & Conferences. The SCMP-branded event is referred to as “China Conference United States: Competition or Cooperation,” taking place Dec. 10, 2019, at The Altman Building in New York City.

The event is to be SCMP’s first U.S. conference, according to a Politico spokesperson.

SCMP is owned by Chinese e-retailer Alibaba, whose billionaire co-founder Jack Ma is a member of the Chinese Communist Party. Likewise, according to the New York Times, Alibaba’s own “position aligns closely with that of the Communist Party.” SCMP itself has faced accusations of “toeing a pro-Beijing line.”

Alibaba acquired SCMP “to use the paper to counteract the negative portrayal of China in the western media,” according to Quartz.  Likewise, according to the conference’s main page, SCMP’s mission is to “Lead the global conversation about China.” The New York Times cited a senior SCMP official as saying at the time, “What’s good for China is also good for Alibaba.”

According to the most authoritative study ever conducted of deaths attributable to communism, China’s current regime has been responsible for approximately 65 million deaths.

The ad in Politico’s Huddle raises the questions, “Can meaningful cooperation be unearthed between China and the United States? Could the trade war do irreparable damage to the economic partnership between the two?” The event offers to “bring together policymakers, business leaders, academics and entrepreneurs to share their views and vision on future growth and opportunities in the region.”

The event, in particular, will feature Politico chief economic correspondent Ben White, who will co-moderate “the closing keynote conversation on the predictions for the next decade of U.S.–China relations.”

The event program could be understood as providing China’s helpful interpretation of how U.S.–China events should develop.

The landing page also offers attendees the chance to “hear business leaders and government officials debate how the global economic, social and technological landscapes will evolve during this time of immense competition and disagreement, and attempt to establish a framework for rebuilding positive, albeit competitive, dialogue between them.”  The event boasts “30+ high-ranking government officials, corporate chiefs and well-known entrepreneur speakers from the United States and China.”

According to Brad Dayspring, Politico’s vice president of marketing and communications, Politico and SCMP began their content partnership in May 2018.

A Wall Street Journal article provided by Dayspring notes the potential for “joint reporting efforts around the continuing trade talks between China and the United States, as well as a potential peace summit between” President Donald Trump and North Korean dictator Kim Jong Un.

A Wall Street Journal article on the Politico–SCMP linkup also mentions that “if all goes well, the companies intend to further develop editorial ties and business initiatives with the possibility of deeper financial investment on both sides.”

Asked if that has materialized, Dayspring said, “There is no financial or economic relationship between SCMP and Politico.”

Instead, Dayspring said, “Politico’s participation in SCMP’s first U.S. conference is within the scope of the existing content partnership.”

He noted that Politico journalists have appeared on SCMP event panels, including an SCMP Kuala Lumpur conference in 2018. According to a release from that event, Michael Crowley, Politico’s senior foreign affairs correspondent, served as the moderator for a panel discussion called, “Towards Safer Regional Security.”

For that release, Crowley said, “We are at the most uncertain and risky moment in U.S. China relations in perhaps 30 years. … As a trade war emerges and top U.S. officials call for a stronger strategic response to China, it is crucial to have public conversations like the one SCMP hosted about potential economic and security consequences.”

“Needless to say, Politico stands by our independent and nonpartisan reporting,” Dayspring said. “It is a part of Politico’s mission and foundational to our success as a publication and thriving business.”

And so, in contexts other than its alliance with SCMP, Politico has a record of being critical of foreign interference.

But in the case of SCMP, Politico is carrying on its site material from a content partner linked to the Chinese Communist Party that toes a pro-Beijing line, whose acquirers explicitly set a goal of influencing China coverage through foreign interference.

Politico is spending any reputation that it’s gained for “independent and nonpartisan reporting” on vouching for the bona fides of what amounts to Chinese Communist Party propaganda.

Christopher C. Hull holds a doctorate in government from Georgetown University. He is president of Issue Management Inc., senior fellow at Americans for Intelligence Reform, and author of “Grassroots Rules” (Stanford, 2007).