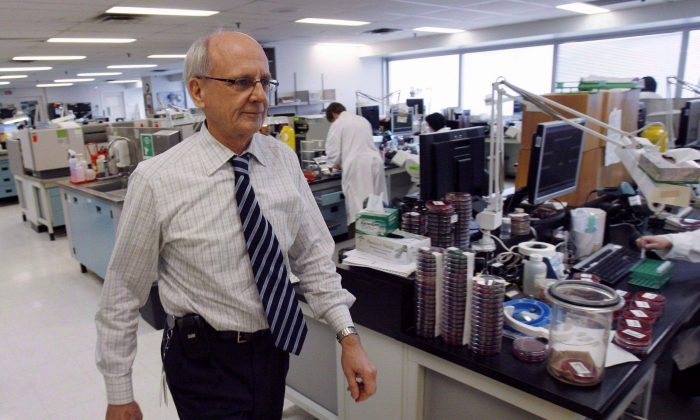 Dr. Donald Low walks through the laboratory in Toronto’s Mount Sinai hospital, Feb. 19, 2008. With more than half of Canada’s lab technicians coming up for retirement within the next 10 years, politicians are being warned of a looming shortage. (The Canadian Press/J.P. Moczulski)
Canada

Over half of Canada’s medical lab technicians will be eligible to retire over the next five to ten years, creating a shortage that may negatively impact the medical system’s ability to provide advice for patients, according to members of the Canadian Society for Medical Laboratory Science.

Lab technicians perform a range of routine tests from urine to blood and are essential to the medical process, technicians with the society warned politicians during a press conference on Parliament Hill on April 28.

“Let’s say you are concerned about having cancer. Now they have to send the test out. A result they could have given you in five hours will now take five days. That’s the concern—it will take longer for you to get your result and longer for you to start your treatment,” said society president Tania Toffner in an interview.

With the exception of Quebec, the group estimates every province has already been impacted somewhat by retirements, and warns that the shortage will become more noticeable over the next 10 years.

“Alberta right now is starting to feel the impact. Ontario has lost 300 medical technologists out of 7,000. It is the start of a looming shortage,” said Christine Nielsen, the Canadian Society for Medical Laboratory Science’s (CSMLS) executive director.

The shortage is already being felt in Canada’s rural areas and remote communities, Nielsen notes.

“We are starting to see rural and remote shortages in B.C. and Nova Scotia. We have been predicting shortages and in some places they are beginning to be felt.”

“One of my colleagues is up in Northern B.C. and she has a lab that doesn’t have a technologist,” said Toffner.

“Now the lab is closed for six to eight weeks until they are able to recruit someone. … That means there is no testing happening there.”

To help offset the shortage, the society is urging the federal government to improve its recognition of international credentials and invest in long-term sustainable funding to ensure that programs are offered consistently across the country.

It also recommends immediately increasing funds for clinical placement spots and to include lab technologists in the Federal Canada Student Loan forgiveness program, similar to physicians and nurse practitioners.

Nielsen said the shortage of technicians will impact other medical services.

“No doctor or nurse is going to want to work in a facility that doesn’t have [lab technician] services,” she said.

“About 70 percent of your health record comes from the lab. It could be as simple as: What is your glucose today? Are you pre-diabetic? Should we be advising on changes to your diet that could delay or prevent the onset of diabetes? Those are simple screening tests. Without suitable facilities you would have trouble drawing other members of the health care team.”

The CSMLS says the government can play a lead role in ensuring that all Canadians have access to these medical services.