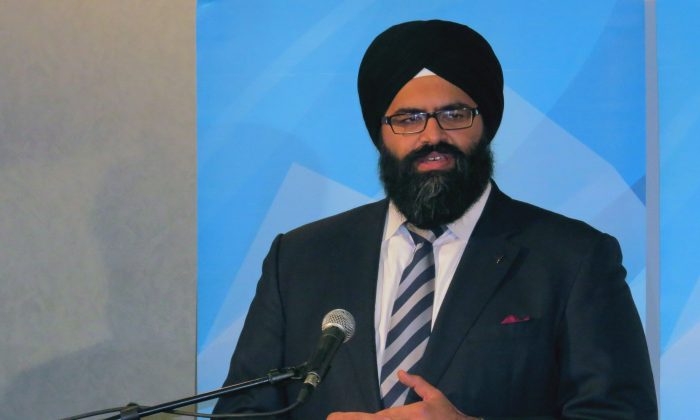 Alberta Human Services Minister Manmeet Bhullar announces new initiatives to improve the investigation and reporting of the deaths of children in government care during a press conference in Edmonton on Jan. 8, 2014. Bhullar was killed was killed on Nov. 24, 2015, while driving from Calgary to Edmonton during a winter storm. (THE CANADIAN PRESS/Dean Bennett)
Canada

Ken Krawetz logs about 55,000 kilometres on roads each year driving to Regina and around Saskatchewan.

In his two decades travelling as a member of the provincial legislature, he has slid across icy roads, hydroplaned on slushy highways, and ended up in snow banks and ditches.

He has hit two deer and one coyote.

The former finance minister, who represents Canora-Pelly in the eastern part of the province, knows that constant travel—sometimes heart-pounding, white-knuckled navigation when the weather turns nasty—comes with the job.

But Krawetz has never been hurt.

“You get shook up a little bit, there’s no question,” he said. “You realize just how lucky it was to actually still be safe.”

A Progressive Conservative member of Alberta’s opposition, Manmeet Bhullar, was killed Monday, Nov. 24, while driving from Calgary to Edmonton as a winter storm hit much of the province. The 35-year-old was struck by a semi after he stopped to help a motorist whose car had flipped on the busy Queen Elizabeth II Highway north of Red Deer.

Several politicians across the Prairies say his death is a grim reminder of a hidden danger they face as part of their jobs—spending numerous hours on the road alone, often when the weather is bad.

“I take the bus partly because I don’t feel safe on the roads in conditions like this,” Alberta Liberal Leader David Swann said Tuesday as snow continued to fall in Edmonton.

He travels to the capital from his riding of Calgary Mountain View on the same highway where Bhullar was killed.

So does Alberta Wildrose house leader Nathan Cooper, who represents the rural riding of Olds-Didsbury-Three Hills. He said Bhullar’s death will make him more cautious.

“It will certainly give me pause the next time the road conditions might not be ideal and you’re rushing up to Edmonton to get here for something that you feel is really important.”

Blaine Pedersen, who has represented a southern Manitoba riding about an hour outside of Winnipeg since 2007, said Bhullar’s death hits close to home.

“I’ve stopped to help people by the side of the road too,” he said.

He’s also hit several deer and had many close calls in all kinds of weather.

I flew a bit in the air. I remember coming down on my tires and trying to control the vehicle.
— MLA Doyle Piwniuk

Doyle Piwniuk represents the constituency of Arthur-Virden by the Manitoba-Saskatchewan boundary. It’s a three-hour drive from Winnipeg and takes several more hours to drive from one end of the district to the other.

He recently drove home in a foggy mist and, while passing a car on the Trans-Canada Highway, suddenly spotted a streak of red on the road. A semi in front of him had hit a deer. Piwniuk had no choice but to drive over the animal.

“It was there before I knew it,” he said. “I flew a bit in the air. I remember coming down on my tires and trying to control the vehicle. These are some of the risks that are out there.”

Reg Helwer puts snow tires on his vehicle every year and calls his wife each time he reaches his Manitoba destination. But the Brandon-West member says he cancels travel plans when it’s not safe to drive.

“Sometimes you feel guilty for not being able to make it to the legislature or a constituency event. But you want to be there to make it the next day.”

From The Canadian Press. By Jennifer Graham in Regina, Dean Bennett in Edmonton, and Chinta Puxley in Winnipeg