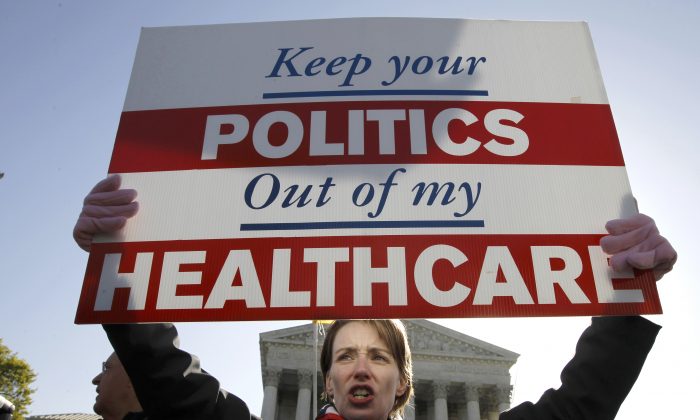 Amy Brighton from Medina, Ohio, who opposes health care reform, holds a sign in front of the Supreme Court in Washington, D.C., on March 27, 2012, during a rally as the court continues arguments on the health care law signed by President Barack Obama. (AP Photo/Charles Dharapak)
Business

Major health insurers have already begun to propose significant premium increases for next year in an attempt to cover their higher than expected costs from health plans on the Affordable Care Act’s exchanges.

In Oregon and Virginia, the first two states to propose rate hikes for 2017, insurers are asking regulators for premium increases of 30 percent and 20 percent, respectively. This news comes on the heels of last month’s announcement by UnitedHealthcare that it is essentially exiting the Affordable Care Act exchanges after losing more than $1 billion in 2015 and 2016. Other major insurers like Health Care Service Corp. and Highmark also lost hundreds of millions of dollars in 2015.

To try to compensate for such losses, insurers have hiked prices by double-digit percentages year after year. That’s despite the fact that the ACA was promised to lower premiums by up to $2,500 for a typical family per year. It’s clear that the ACA in its current form is unsustainable. Its promise to provide “more choice, more competition, and lower costs” has resulted in less choice, less competition, and higher prices.

So what happens now? The debate over whether to repeal or reform the ACA, featuring politicians more interested in partisanship than improving health care, will surely rage on. But while Capitol Hill bickers, Main Street innovates.

Health entrepreneurs around the country are quietly experimenting with ways to offer good care for a cheap price. They are tapping into the market created by the proliferation of ACA-induced, high-deductible health care plans, which have turned compliant patients into discerning shoppers trying to find the best price for their tests, X-rays, MRIs, and doctors’ visits.

Health entrepreneurs around the country are quietly experimenting with ways to offer good care for a cheap price.

Consider Dr. Keith Smith, who runs the Surgery Center of Oklahoma. He took the radical step (in the health care industry, anyway) of posting his prices online. This allows patients to shop for health care services like any other industry. Such transparent pricing caused patients to flock to him, forcing providers from as far away as Wichita to do the same. Next came the price war among providers, which has contributed to this region’s having some of the cheapest procedure prices in the nation. Markets and small-business ingenuity did what the ACA has been unable to do: actually lower health care prices for consumers.

Or look at the boom in telemedicine, where entrepreneurship and technology allow people to see a doctor over Skype or FaceTime, cutting out one of the major inefficiencies in health care: waiting rooms. Even better, Doctors on Demand is bringing back doctor house calls—a relic of a bygone time—for the general population for about $100 a pop. This “Uber for doctors” business model is exactly what the outdated and bureaucratic health care industry needs.

Retail health clinics found in pharmacies and department stores that are staffed by nurse practitioners and physician assistants can also offer deep discounts to the traditional doctor and insurance model. They have cared for tens of millions of patients, have very high customer satisfaction ratings, and are open seven days a week.

Lastly, there’s Epiphany Health in Southwest Florida. This clinic has brought a concierge care model, where patients pay a monthly fee for a set of services, to the area’s fixed-income population. It is offering affordable and comprehensive primary care—but not drug rehab, acupuncture, contraception, and the myriad of other services that drive up the price of insurance premiums.

In true entrepreneurial fashion, the owner is offering the monthly health service for about the price of monthly cellphone service, after seeing that his Medicaid patients all had iPhones. He thought that if low-income individuals can shell out $100 a month for an iPhone, they can do the same for quality health care. It’s iPhone principles for a Post Office industry.

As the ACA continues to struggle, the public is focusing on politicians’ endless partisan debates over health care. Meanwhile, small businesses are out fixing it.

Alfredo Ortiz is the president and CEO of the Job Creators Network.