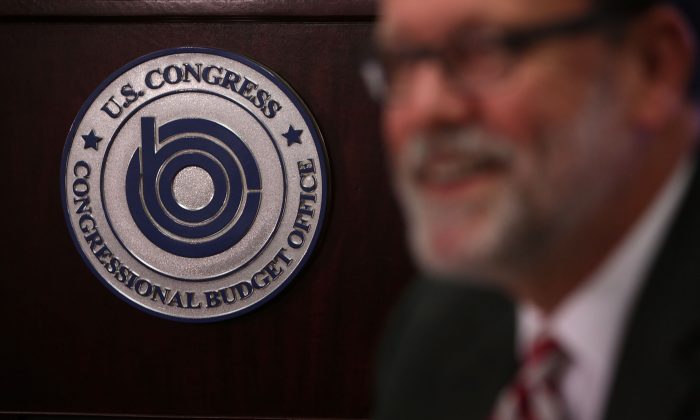 A couple of months ago, the Congressional Budget Office issued a sobering report on the U.S. economy’s long-term prospects. Not to put too fine a point on it, we’re headed for the fiscal rocks.

Federal spending accounts for about 20 percent of the nation’s GDP, the budget analysts note; if current trends continue, that will rise to fully 25 percent by 2040. Revenues will not keep up—they’ll amount to only 19 percent of GDP.

Here’s what the non-partisan CBO has to say: “Mainly because of the aging of the population and rising healthcare costs, the extended baseline projections show revenues that fall well short of spending over the long term, producing a substantial imbalance in the federal budget. As a result, budget deficits are projected to rise steadily and, by 2040, to raise federal debt held by the public to a percentage of GDP seen at only one previous time in U.S. history—the final year of World War II and the following year.” We face a fiscal crisis of historic proportions.

Our presidential candidates can talk all they want about American prosperity and world leadership, but without a firm fiscal base it’s just hot air. Unless we can stabilize the debt and put the country on a path of sustainable economic growth with prosperity evenly shared, we’ll have no firm economic base for all those lofty goals to rest upon.

This means tackling a host of complex problems. We have to get long-term debt under control. We have to preserve Social Security yet find a solution to rising entitlement spending, which will be a key driver of federal spending for decades to come. We have to deal with healthcare costs, which pose the same challenge. We have to invest in skills, education, and infrastructure without breaking the bank. We have to craft a simpler, fairer, less intrusive tax policy that promotes economic efficiency and is conducive to long-term growth.

The people who have to do all these things are politicians who, thus far, have been unwilling and unable to take these obvious challenges head on. The problem is not with the system itself. Similar barriers have been overcome repeatedly in the past, with reforms in Social Security in 1983, taxes in 1986, and repeatedly in budget agreements.

Rather, the problem is that our leaders are divided between those who want to cut spending and those who want to boost taxes in order to expand government’s role. Yet it’s impossible to solve our problems by finding new revenues or cutting spending alone. Without doing both, we face a weakened future. It is unreasonable and unacceptable to try to continue our present course of trying to muddle through.

There’s a reason that you don’t hear much talk about this in Washington. Americans themselves want it all—lower taxes without significant cuts in federal spending. But here’s the problem: Almost 60 percent of federal spending is accounted for by Social Security, Medicare, and defense and national security. Add the 7 percent of the budget that goes to interest on the national debt, and there’s little room for significant progress without painful and difficult legislative action.

Political leaders should grasp these realities and act now. But they have not, so it’s up to Americans to pressure them to do so. True, nothing will happen without presidential leadership. All issues will have to be on the table, because the pain needs to be shared broadly. And progress will require the adroit bipartisan participation of congressional leaders.

Instead, those who believe in a single path assure us that we need only wait until the next election and they’ll get the forces they need. This is a pipedream. The electorate is too evenly divided and too volatile to sustain complete control by one side over several elections.

So really, it’s up to the American people to demand action. We have to create the political will that drives our leaders to deal with these difficult economic problems—that leads them to tackle entitlements, health costs, investing in the future, and tax reform. The question is whether our political leaders are up to the task before our economy runs out of time.