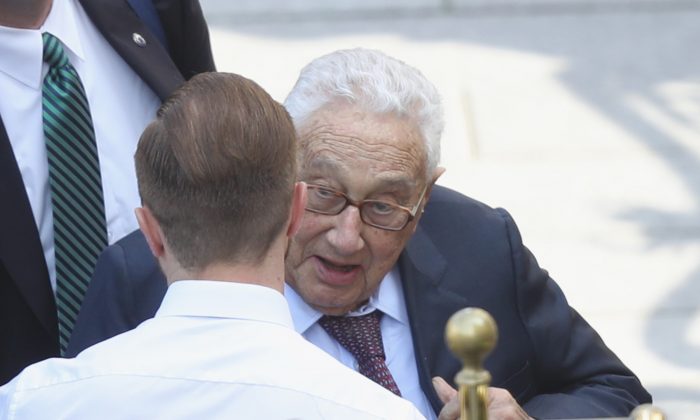 LONDON—At the same time as the G7 meeting is taking place in Quebec, Canada, another meeting of world leaders is happening in Turin, Italy.

The annual Bilderberg conference is much less likely to lead news agendas given its secretive nature, but it is arguably as important.

Heads of state, royalty, industry leaders, and—for the first time in recent memory—a representative of the Vatican are meeting at a hotel in Turin from June 7 to 10.

The list of more than 120 participants was released just a few days before the meeting was scheduled to take place.

Other attendees may have less recognizable names, but they are drawn from the top of their fields.

They include the director-general of UNESCO, the chairman of Goldman Sachs International, the CEO of Royal Dutch Shell, the president of the World Economic Forum, CEO of Airbus, and the prime ministers of Belgium and the Netherlands.

The group’s president is Henri de Castries, vice chairman of Nestle and a director of HSBC.

Meetings are held under the Chatham House Rule, meaning participants cannot reveal the identity of the speakers

Writer Charlie Skelton has been covering Bilderberg for years and says that in recent times, more and more guests have come from the world of technology and artificial research.

“These really are cutting edge people,” said Skelton. “They could so easily have been stuck in a Cold War, bankers, big oil dead end, but they haven’t. They’re evolving.”

The idea of the meetings and their secrecy is, according to the organization’s press release, a “forum for informal discussions about major issues facing the world” in which “participants are not bound by the conventions of their office or by pre-agreed positions.”

Meetings are held under the Chatham House Rule, meaning participants can use the information they hear, but cannot reveal the identity of the speakers or their affiliations.

In the past, scant details were known about the meetings or the guests, leading to independent researchers waiting outside the meetings to spot who would go in and then speculate about what was on the agenda.

In recent years, though, wider media coverage has forced the conference to release the topics being discussed, which are often quite broad in scope.

Top of the agenda this year is “populism in Europe,” with various tech-themed subjects following, such as “the future of work,” “artificial intelligence,” and “quantum computing.”

U.S. President Donald Trump will not be in attendance, but he will be discussed. Topics with a Trump theme include “the U.S. before midterms,” “free trade,” and “U.S. world leadership.”

Other topics include “Russia,” “Saudi Arabia and Iran,” “the ‘post-truth’ world,” and “current events.”

“There’s a sense that they’re all getting together to solve the world’s problems,” says Skelton. “But the issue with that is you’re having to buy in to the idea that all of these politicians are problem-solving with the very people that caused half of the problems.”

Skelton points out that the politicians, royalty, and academics will be rubbing shoulders with representatives of BP, Shell, Total, arms companies like Airbus, and giant hedge funds like KKR.

In the past, independent journalists covering the meetings have attempted to speak to guests, usually without success.

At 2016’s meeting in Dresden, however, Peter Thiel broke with protocol and addressed a question from journalist Luke Rudkowski about whether his libertarian principles conflict with Bilderberg’s secrecy.