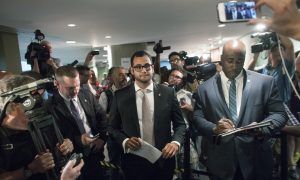 Politician Threatens to Sue Reporter if His Name Is Used

A small town newspaper in Maryland has gone to war with a county politician over two little words: Kirby Delauter. The name of the Frederick County councilman is apparently perceived as the personal domain of the former U.S. Army soldier and father of four who lives in Thurmont, Md.

The row started on Sunday when Delauter posted a strongly worded Facebook message to Bethany Rodgers, a reporter for The Frederick News-Post.

“Shame on Bethany Rodgers for an unauthorized use of my name and my reference in her article today,” wrote Delauter.

The offending article, published on Jan. 3, is on the mundane topic of problems over parking spaces for council members.

He went on to explain that he got miffed with Rodgers when she contacted him for comment on the story and he didn’t respond, yet she went ahead and wrote her story anyway. “I did not return her call and did not authorize any use of my name in her article.”

According to Delauter, the bad blood between him and Rodgers goes back to a recent election where he accused the three-year staffer of the Post of doing a hit piece on him in which she “embellished, twisted, and downright lied.” He ended his Facebook message to Rodgers, which has since gone viral, by pre-emptively forbidding any reference to him in any future article.

“It is not just our right but our responsibility to report on people like you, who occupy positions of trust in our government, and I make no apologies for doing that,” wrote Rodgers. She also promised to continue to contact him for comment on stories referencing him, regardless of whether he returns her calls.

“Use my name again unauthorized and you’ll be paying for an Attorney [sic]. Your rights stop where mine start,” he wrote.

After having a good laugh over the threat, The Frederick News-Post took up their pens and published a tongue-in-cheek editorial on Tuesday that uses the name “Kirby Delauter” a total of 24 times. They also toyed with different variations on his name that could be used instead, just in case threats of legal action had any basis in reality. Some of the variations included calling him KD and G-Lat (a reference to his campaign slogan of Govern Like a Taxpayer). Another reference to a classic joke from the 1980 movie “Airplane” was even slipped in among possible aliases.

“We could take the low road down even further and childishly mangle ‘Kirby Delauter’ into references you, the reader, would still understand,” reads the editorial. “‘Sherbert Deluder,’ say. Or ‘Derby Kelauter.’ ‘Shirley Delaughter’ (and don’t call me Shirley).”

The editorial does end on a serious note, though, with a proper third estate reprimand to Delauter.

“If he wants to govern like a taxpayer, he needs to respect the taxpayers whose money provides his paycheck, stop this silly, inflammatory nonsense, and get to work.”

Kirby Delauter did not respond to a request for comment by the Epoch Times before press time.