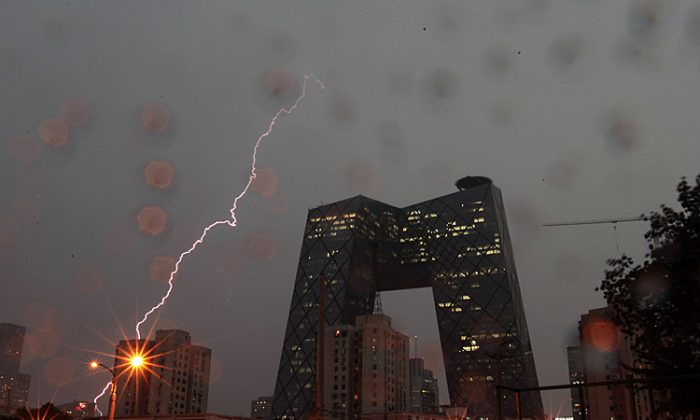 Lightning strikes downtown Beijing in July 2011. In the foreground is the headquarters of the Chinese regime's mouthpiece China Central TV. The political storm raging in Beijing requires each of us to take a stand. (ChinaFotoPress/Getty Images)
Opinion

In the battle between good and evil, there are no bystanders.

Since February, international attention has focused on one momentous political event after another in China.

On the night of Feb. 6, Chongqing Deputy Mayor and former Chief of Police Wang Lijun escaped to the U.S Consulate in Chengdu and revealed a plan by Chongqing Party chief Bo Xilai and domestic security czar Zhou Yongkang to launch a coup.

A little more than a month later, Bo Xilai was removed from office.

Next, the terrible crimes committed during the persecution of Falun Gong by Zhou Yongkang and the Political and Legislative Affairs Committee (PLAC) he heads started to surface. At the same time, the unprecedented expansion of the PLAC’s power and its extrajudicial abuse of authority became widely recognized.

Last week, the blind human rights lawyer Chen Guangcheng escaped house arrest in Shandong Province and fled to the U.S. Embassy in Beijing. Chen’s plight was yet another example of the dark operations of the PLAC and concentrated the world’s attention even more closely on human rights conditions in China.

Media reports have often described this series of events as instances of infighting among the high-level officials in the Chinese Communist Party (CCP), but the story is not that simple.

During the CCP’s 63-year-long rule of China, it has committed countless crimes against the Chinese people.

In China’s five thousand year history, no single dynasty or political figure has killed as many Chinese citizens as the CCP has. In a time of peace, the CCP has persecuted hundreds of millions of Chinese, causing 80 million Chinese to die from unnatural causes. This is more than is estimated to have died in World Wars One and Two combined.

The damage the CCP has caused to the Chinese people’s bodies, spirit, and culture could not be graver. The 13-year-long persecution of 100 million Falun Gong practitioners is absolutely horrendous, infuriating both heaven and humankind.

The crimes the CCP has committed against the Chinese people have consequences, and the CCP’s rule is ready to collapse.

The political storm that has shaken the topmost reaches of the CCP has been about the attempt to avoid blame for evil.

The CCP head Hu Jintao, the Premier Wen Jiabao, and the presumptive next head of the CCP Xi Jinping do not want to be blamed for the persecution of Falun Gong, which was started in 1999 by former CCP head Jiang Zemin.

Jiang Zemin, Zhou Yongkang, Bo Xilai, and others want to avoid being held accountable for the crimes they have committed in trying to “eradicate” Falun Gong. They were willing to go so far as to plot a coup in order to keep power firmly in their hands.

But their moment has passed. Everyone in Chinese society, from high-ranking officials to common farmers, dislikes the persecution of Falun Gong. Falun Gong practitioners have patiently educated the people of China about the evil of the persecution and the goodness of their spiritual practice. The practitioners have transformed the situation in China.

Today history presents us a choice …