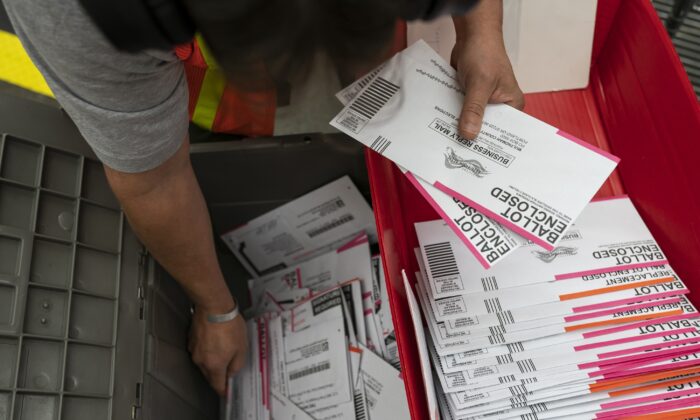 A U.S. House race in a district on the outskirts of Portland, Oregon, is becoming a costly one that both parties deem worthy of significant investment.

Democratic-allied groups have put $3.8 million into backing civil servant Jamie McLeod-Skinner in the 5th Congressional District, which extends southeast of the state’s largest city. Meanwhile, Republicans have contributed more than $3 million to her opponent, Lori Chavez-Deremer, the former mayor of the Portland suburb of Happy Valley.

The district, once covering most of Oregon’s coast, was significantly redrawn as the state gained a congressional seat, to expand its delegation in the House to six. The district, which lost coastal areas and now extends deeper inland, had been represented for 14 years by Kurt Schrader, a moderate, who lost to the more progressive McLeod-Skinner in the primary.

McLeod-Skinner is an engineer, a small business owner, emergency response coordinator, and served as interim city manager of Talent, Oregon, according to her website. Efforts to reach her campaign for comment were unsuccessful.

“Jamie began her public service managing the repair of schools and hospitals in war-torn Bosnia and Kosovo and has led organizational change, mediated community disputes, and managed teams through crises,” according to her campaign website. “Jamie is committed to lowering the cost of health care and prescription drugs, helping families get ahead in this difficult economy, and implementing proven solutions to tackle crime.”

Thank you to everyone who joined us at our office opening in Oregon City. This election is about building a shared vision for our future. That’s why we’re partnering with great candidates across the ballot. Join us to get out the vote! https://t.co/sSq3eoNMV3 pic.twitter.com/YrDDOT8dzz

The Democrats’ redistricting plan didn’t make the district any easier for a Republican, said Ben Roche, vice chairman of the GOP central committee for Linn County in District 5. But he thinks the area’s political climate will help the GOP on several issues there, including crime, energy, and education.

“This is a top 10 or top 15 race across the country,” said Chavez-Deremer’s campaign manager, Jihun Han. “We’re getting the support we need.” The race is rated as a (narrowly pro-Democratic) toss-up, “and she’s running against an extremist,” making it winnable.

McLeod-Skinner made her position clear in a video describing why she ran to dislodge her party’s incumbent, Schrader.

She hammered Schrader for taking money from the fossil fuel industry, for stripping renewable energy provisions out of the Build Back Better bill, and for objecting to former President Donald Trump’s impeachment.

“She has a history of being a radical activist,” said Roche. “She talks very much about the transformation of our society, in terms of woke and identity politics issues.”

Han said that while Schrader was endorsed by Joe Biden, McLeod-Skinner is supported by Elizabeth Warren.

“She ran on an ultra-progressive Green New Deal, climate change, Medicare for All [platform]. It’s what propelled her.”

Chavez-Deremer, by contrast, is an excellent retail politician with a history of being bipartisan, Roche said. She led Happy Valley, a growing suburb now with about 25,000 people, as its mayor for eight years.

Portland drew the nation’s attention with its aggressive Black Lives Matter protests— including repeated attempts to set the federal courthouse on fire—and defund-the-police politics in the wake of George Floyd’s death in 2020. While the disorders were mainly confined to Portland’s downtown area, crime has subsequently soared and leaked out to suburban areas, Roche said.

Chavez-Deremer, a small businesswoman married to her high school boyfriend who became an anesthesiologist—they own several clinics—has made homelessness one of her main issues. Addressing homelessness is something that compassionate conservatives like her get, Roche said.

While some frame it as a problem of affordability, Roche said, Chavez-Deremer sees it more as a problem of mental health and drug addiction. Addicts and the mentally ill can’t hold jobs or pay rent, she points out.

Addiction is being driven by Oregon’s increasingly permissive drug laws. Even the possession of small amounts of hard drugs such fentanyl, crack cocaine, and heroin has been reduced to a misdemeanor, with a $100 fine that can be waived if the defendant signs an affidavit promising to seek treatment. But there’s no follow-up, Roche said.

That connects to a Washington issue Chavez-Deremer wants to address as a congresswoman.

“Lori wants strong border security and getting the drugs off the street,” Roche said.

“Every state is a border state now,” Han said.

It was an honor to have Leader @kevinomccarthy in Oregon to visit with our local elected officials to discuss rising crime rates around the Portland metro region. These smaller cities all agreed that radical policies don’t work and want a leader who will listen! #OR05 pic.twitter.com/Or0v5W2xvC

Roche said he met the candidate at a party several years ago; she came to visit the manufactured housing plant where he works because of its relationship to homelessness.

Nor are property crimes enforced. The drug-addicted and homeless populations increasingly leave their encampments to come out to the suburbs to steal. The theft of catalytic converters from cars—Priuses are a particular target—has reached such proportions that a cottage industry has developed to help people secure the parts in their own vehicles, Roche said. He credited metro-area police with a recent major bust of a catalytic converter theft ring.

Chavez-Deremer sees the schools in a crisis state, Roche said. The issues go beyond what many parents have just become concerned about lately around the country. Oregon has spent a lot on health care and education for decades but doesn’t have much to show for it. It ranks low in education.

While the state passed a new corporate tax recently, school enrollments are down, and test scores are down. He said testing requirements were eliminated during the COVID lockdowns, and as a result, some colleges are hesitant to accept Oregon students.

“My wife works for the school district. We see it every day.”

Roche said that a brewing energy crisis is an area of great concern for Chavez-Deremer. The state has banned nuclear power and recently closed a coal-fired plant, and some progressives advocate doing away with hydropower as well to restore rivers to their natural state.

But meanwhile, alternative sources haven’t been implemented. With its cloudy climate, Oregon isn’t ideal for solar power, and wind and wave energy haven’t come close to providing alternatives, Roche said. Oregonians fear they are next in line for California-style rolling blackouts, he said.