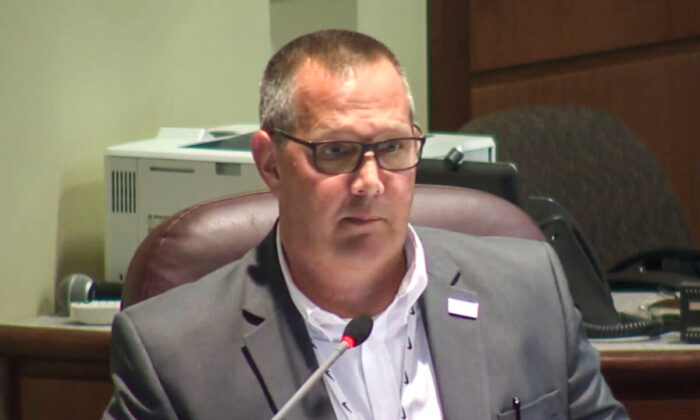 Loudoun County Superintendent Scott Ziegler is seen during a school board meeting in Ashburg, Va., on June 22, 2021. (LCPS/Screenshot via The Epoch Times)
Viewpoints

Political Lies That Can’t Be Refuted

Way back in 1967, in that brief window of time between the media’s notice of the sexual revolution and its dawning awareness of second wave feminism, Hollywood made a movie called “A Guide for the Married Man,” which celebrated the joys of (male) adultery. Nowadays Tinseltown may practice it but doesn’t (usually) preach it; then it did both.

In one segment the mentor of a prospective adulterer answers the question of what to do if you are caught in the act by your wife by saying: “Deny, deny, deny.” There follows a vignette in which a man so caught does just that—until his partner in sin gets up, dresses and leaves.

Deplorable as the whole idea of such a movie is, there is a deep wisdom in this scene, which is this: when it ceases to be possible to catch someone in a lie, it also becomes impossible for that person to lie.

So long as the liar, like Charlie, holds the whip hand and therefore is powerful enough that it is impossible for anyone else to require him to admit to his lie, it’s not a lie.

The principle is basically the same as that expressed by the 16th century poet Sir John Harington:

“Treason doth never prosper; what’s the reason?
“For if it prosper, none dare call it treason.”

I tried to make a similar point, as you may remember, two weeks ago in this space, when I wrote that a lie that everybody knows to be a lie is no longer a lie but a kind of functional truth, since our knowledge that it’s a lie can reveal to us the truth.

It’s at that point, anyway, where those of us without the power to force an admission of lying can only shrug our shoulders and say of the liar, “Well, I guess he’s only expressing his truth.”

The examples I gave in that earlier column were taken from the collected works of President Joe Biden—most egregiously the obvious lies that the American evacuation of Afghanistan was “an extraordinary success” and that a $3.5 trillion spending bill would actually cost “zero.”

Of course, the power of the president to lie with impunity is not a constitutional one but is conferred upon him by the media, whose own greatest power is the power to ignore.

Applied to presidential lying, this power to ignore and therefore not to expose the lies means that, even if everybody knows they are lies, they can continue to function as truth—the president’s truth.

Despotisms have always functioned in this way, but usually through the despot’s direct control of the media. In America today the situation is somewhat different. The media’s power to ignore or to promote as truth the lies of the ostensible autocrat is assumed voluntarily and without constraint or fear of punishment.

That would fit, too, with the sense that many of us have that, nasty as the old Joe Biden could be at times, the nastiness of his administration is no more all his own work than anything else that’s happened over the last nine months.

We caught a glimpse this week of how the process of collaboration between the media and Democrats in power to set the administration’s agenda works. The notorious letter from Attorney General Merrick Garland to the FBI, as reported in this space three weeks ago, setting up a task force to investigate as potential “domestic terrorism” any complaints by parents about left-wing curricular or other changes to public schools affecting their children turns out to have been not quite what it seemed at the time.

It was a result of collaboration between Garland and a few left wingers at the National School Boards Association, from which numerous state boards have since dissociated themselves, and was based at least in part on an incident in Loudoun County, Virginia, last June.

Then an aggrieved father, Scott Smith, was tackled by police and arrested at a school board meeting after complaining that his 15-year-old daughter had been raped in a girls’ restroom at Stone Bridge High School by a boy taking advantage of current left-wing orthodoxy to pose as a “transgender” girl.

On that occasion, Scott Ziegler, the Loudoun County school superintendent proclaimed that, “To my knowledge, we don’t have any record of assaults occurring in our restrooms,” adding on the authority of Time magazine that “the predator transgender student or person simply does not exist.”

This was a lie on both counts. The Daily Wire reported two weeks ago that numerous allegations of sexual assault at the school had not been reported, as state law requires school authorities to do.

That, apparently was why “we don’t have any record” of such assaults. They didn’t trouble themselves to make one.

Then, on Monday, the “transgender” predator was convicted of assaulting not only Smith’s daughter but another girl at another school to which he had been transferred later as a potential embarrassment to Stone Bridge’s transgender restroom policy.

At this writing, Superintendent Ziegler still has his job. Deny, deny, deny certainly seems to have worked for him.

And, although the National Association of School Boards has since repudiated its own letter calling for investigation into “domestic terrorism,” Attorney General Garland still has his FBI task force to investigate it, as he informed the Senate Judiciary Committee on Oct. 27.

Joe Biden still has his job too, though now we have a better idea than we did nine months ago what that job is. It’s to cover up left-wing lies by playing the role of doddering old Uncle Joe who doesn’t know what he’s saying half the time anyway. You could call it type-casting.