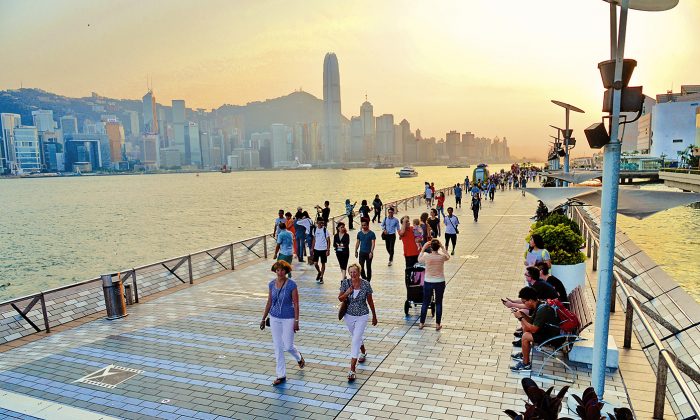 The LCSD said in a statement that the new space for food and beverage outlets, the observation deck, and other facilities are out now. The announcement cut the three-year timing budget in half.

Upon completion, the Tsim Sha Tsui Promenade will be managed by the LCSD. When NWD chairman Henry Cheng Kar-shun attended a shareholders’ meeting the next morning, he responded to media inquiries by saying it was “not clear” and “no official notification was received.”

However, commentators have said the incident is related to the political battle between the factions of the Chinese Communist Party (CCP) loyal to current regime leader Xi Jinping and former leader Jiang Zemin. Hong Kong is said to have become Beijing’s wrestling arena.

Last September, the LCSD announced the expansion plan of the Avenue of Stars in the Tsim Sha Tsui area. The revitalization project, plus a 20-year management contract, was entrusted to NWD without an open tender process.

This caused a widespread public outcry questioning the under-the-table deal and the financial benefits involved. The company Sino Land and the Shangri-la consortium have filed applications for judicial review to challenge the government’s decision to renovate the Tsim Sha Tsui Promenade.

Media has reported that several heavyweight consortiums have formed an alliance to contend with the government. This can be viewed as open dissatisfaction with Leung’s team, and it also signifies that Leung’s behind-the-veil supporter—the faction of former CCP leader Jiang Zemin—is losing ground.

Reports also stated that after Jiang came to power, he started the most corrupt state policy in China. Due to Hong Kong’s special geographical location, Jiang, his ally Zeng Qinghong (a former CCP vice chair), and their supporters arranged many underground forces in all walks of life in Hong Kong over the past 20 years.

Those who were disobedient were purged widely, and few dared to voice out their discontent.

Since Leung took office, he has been accused of intentionally provoking social conflicts in Hong Kong with the support of the Jiang faction.

Leung is an underground CCP member selected by the Jiang faction as Hong Kong’s chief executive. After Leung took office, he implemented Jiang’s policies to create chaos in Hong Kong, including promoting the mainland educational curriculum (which Hong Kong parents view as brainwashing), persecuting the spiritual practice Falun Gong, undermining Hong Kong’s judicial independence, and pushing a “white paper” issued by the State Council’s Information Office aimed at destroying the policy of “one country, two systems” that defines the relationship between China and Hong Kong.

This caused a public outcry in Hong Kong. Previously, many Hong Kong tycoons had difficulty seeing through the situation and became Leung’s financial supporters. Now, seeing that the Jiang faction is on the losing side, they have chosen to cut connections with the Jiang faction one after another.

After the Tianjin explosions and a series of other incidents, the struggle between the Jiang Zemin faction and the faction of current CCP leader Xi Jinping entered an intense stage. What used to be positive factors have now become negative ones.

One example is Asia Television Limited (ATV). The reason it took so long to find a new owner is because Xi would not let any interested consortium or tycoon with connections to the Jiang faction take over ATV.

This could be Xi’s response to the Mongkok incident, because of the timing of the related incidents.
— Shi Cangshan

The timing of the abrupt withdrawal of the Avenue of Stars project is sensitive, as it occurred soon after the Mongkok incident. On the morning of Feb. 9, the second day of the Chinese New Year, two warning gunshots were fired into the air as hundreds of protesters clashed with the police in Mongkok.

It was the first gunshot fired by Hong Kong police during public protests in 40 years. Nearly 70 people have been arrested in the wake of the Mongkok incident.

Since Leung took office, he has been accused of intentionally provoking social conflicts in Hong Kong with the support of the Jiang faction. These include the rise of the pro-Beijing party Caring Hong Kong Power to counteract the pan-democratic camp, as well as the Beijing-backed Hong Kong Youth Care Association being used to harass Falun Gong.

On Jan. 28, media reported that Li Qiufang, Central Commission for Discipline Inspection (CCDI) team leader of the State Council of the Hong Kong and Macau Affairs Office (HKMAO), has been appointed to be stationed in the HKMAO and will be directly accountable to the CCDI. This is the first time in the CCDI’s history that it has had officials stationed in the HKMAO.

Some analysts believe this indicates Zeng Qinghong’s influence in Hong Kong will be further purged.

Hong Kong has been a hideout for Jiang’s allies. The recent crisis and chaos are the inevitable result of Jiang desperately fighting back.

In the afternoon of the day the LCSD officially announced the scrapping of the project, NWD chairman Henry Cheng Kar-shun attended a shareholders’ meeting in the morning. When the media asked about the relevant information, he repeatedly claimed that he was unaware of any changes.

Shi Cangshan, an expert on China issues, believes this could be Xi’s response to the Mongkok incident, because of the timing of the related incidents.

Coincidentally, bad news has emerged again for Leung’s backstage supporter and Jiang’s top ally, Zeng Qinghong. References to Prince Qing, a corrupt Manchu noble from Chinese history, have again been used in mainland Chinese media to attack Zeng. This time, the media hinted that Zeng might be arrested.

In February 2015, the CCDI’s official website published an article titled “Qing Dynasty’s Naked Official: The Style Issue of Prince Qing.” It was widely believed that “Prince Qing” was alluding to Zeng Qinghong.

The article explains that the Six-Foot Lane became a popular attraction after New Year’s Eve, and it was crammed with visitors from all over the country.

The article concluded: “Their cases tell us clearly that those engaged in corruption will end up in misery.”

Hong Kong media commented earlier that Wang arranged his visit to Six-Foot Lane when his special patrol had just started, and the purpose was to “warn the elite class.”

Lan Shu, a special commentator of the Sound of Hope (SOH) radio network, believes Xi’s authorities’ next anti-graft target will obviously be Zeng, most likely during the period of the National People’s Congress and National Committee of the Chinese People’s Political Consultative Conference (CPPCC) this year.

Lan thinks Xi’s authorities will focus on Zeng, and arresting Zeng will release a clear signal, which is to root out Jiang Zemin.

The New Year clashes and the police gunshots represent the acceleration of Hong Kong’s crisis, behind which is the fierce wrestling in Beijing. Before Beijing’s political contest has a clear picture, the crisis and chaos in Hong Kong will not be over, and Hong Kong will be further torn apart.

Current affairs commentator Lai Chak Fun stated that Leung should step down after the Mongkok incident.
Xia Xiaoqiang expressed that Hong Kong’s chaos can be quelled under two circumstances. One is to sack Leung immediately, and the other is to announce the arrest of Jiang and Zeng right away.

Translated by Susan Wang and written in English by Sally Appert.