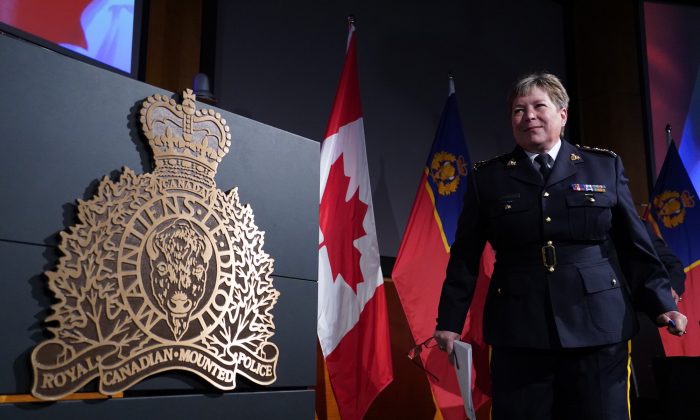 RCMP Commissioner Brenda Lucki leaves after providing an update on the ongoing investigation and arrest of RCMP official Cameron Ortis at RCMP National Headquarters in Ottawa on Sept. 17, 2019. (The Canadian Press/Chris Wattie)
Canada

Some retired RCMP officers say political interference has long been a problem for the force and that the latest scandal involving Commissioner Brenda Lucki is only one indication.

Lucki is alleged to have pressured the Nova Scotia regional RCMP division to release information to the media about the types of firearms used in the April 18–19, 2020, mass shooting in that province in order to fulfill a promise she made to the public safety minister and the Prime Minister’s Office (PMO).

The commissioner, who is appointed by the prime minister, allegedly told the regional division that “this was tied to pending gun control legislation.” This was according to handwritten notes by RCMP Superintendent Darren Campbell documenting an April 28, 2020, conference call between Lucki at national headquarters and the regional division in Nova Scotia. A second RCMP staff member had the same recollection from the meeting, according to documents released on June 28, 2022.

At the time the federal government was about to ban 1,500 firearms it described as “assault-style.”

Rob Creasser had a 28-year career with the RCMP in British Columbia before retiring in 2010. He helped spearhead efforts to form the Mounted Police Professional Association of Canada (MPPAC), which represents the force in collective bargaining. He says politicization and “dysfunction” remain ongoing problems for the force.

“One of the things that the association always pushed for was a separation of ‘church and state’ between the RCMP senior leadership and the government of the day,” Creasser told The Epoch Times.

“We always felt it was an inherent conflict for the prime minister of Canada to appoint the head of Canada’s national police service, and we even proposed some alternatives.”

It’s a situation that results in the politics of the RCMP matching that of the ruling party, Creasser said.

Creasser says since the Trudeau government was elected, there’s been more of a drive toward certain directions, such as having a “more feminist approach.” He adds that the preoccupation with political considerations undermines officers’ best judgment.

“I had the unfortunate experience of being shot at quite close range in my career. And I know what I went through after that because the gentleman that pulled the trigger on the other end was a visible minority, and it made me think twice,” he said.

“It makes you second-guess yourself as to whether you want to pull that gun. And I don’t think that’s a good frame of mind to be at when your life or the life of others is involved.”

In February, the Mass Casualty Commission (MCC), an independent public inquiry created to examine the 2020 Nova Scotia attack, subpoenaed the notes by senior RCMP officers from April 19 to June 16, 2020. However, the Justice Department initially withheld four pages of notes by Campbell regarding the April 28, 2020, conference call.

According to the notes, Lucki stated that “she had promised the minister of public safety and the Prime Minister’s Office” that information about the firearms used by the killer would be released and “that this was tied to pending gun control legislation that would make officers and [the] public safer by or through this legislation.”

The Justice Department told The Epoch Times it didn’t release the missing pages until May 31 due to deliberations on whether the contents were “privileged.”

“What more do you need to see knowing that there’s something going on here?” Brooke told The Epoch Times, calling the situation “a snowball gathering size coming down the mountain.”

“The PMO is doing everything it can to prevent this thing from becoming bigger than it has to be, an avalanche,” he said. “This has now risen to a level of corruption without a doubt in my mind, and I’m a hard sell on that one.”

Brooke, who is trained in forensic interviewing, says Campbell’s notes showed that Lucki seemed unusually intense during the conference call.

“Look at her in parliamentary testimony before the Emergencies Act committee. She’s very mousy and non-committal and evasive and quiet-spoken,” he said.

But during the conference call, she is “so intense that you have people being reduced to tears, and a deputy has to intervene. … That’s not coming from within her. That’s her acting, in my view, to external forces.”

Brooke filed a complaint with the Civilian Review and Complaints Commission for the RCMP as part of the Coalition for Criminal Accountability for Flight PS752, saying the RCMP needs to investigate the issue.

“We’re demanding a Canadian criminal investigation into the downing be opened. The second thing is that all the circumstances surrounding her decision be investigated,” he said.

“If there was no standing to this complaint, if it had no merit whatsoever, they would have bounced that back to us. We put in there evidence of political interference.”

Rae Banwarie served in the RCMP in British Columbia from 1997 to 2017 and was the MPPAC’s first national president. He says other investigations declined under Lucki’s leadership helped the Liberals contain scandals.

Banwarie says he believes Lucki’s alleged behaviour in the wake of the Nova Scotia mass shooting is reason enough for her dismissal.

“When I see things like that it just disgusts me,” he said.

The RCMP said in an email that its operations are “entirely independent and completely free from any government influence.”

“We are aware of the perception of bias associated with our dual mandates of protecting Canadian dignitaries as well as our investigative mandate with respect to politically sensitive matters,” a spokesperson said. “The RCMP takes all reports it receives very seriously and any decisions taken are reflective of the thoroughness, diligence and independence of our actions.”

The spokesperson added that when it comes to the issue of SNC Lavalin and WE Charity, the police force “continues to examine these matters carefully with all available information and will take appropriate actions as required,” adding that since “these are ongoing matters, we cannot provide any more comments at this time.”

Lucki has said that she didn’t interfere with the investigation into the Nova Scotia mass shooting, that the federal government has expressed confidence in her, and that the government didn’t exert any political influence.

“We did not put any undue influence or pressure,” Trudeau said on June 23.

Editor’s note: This article was updated to add statements from the RCMP.