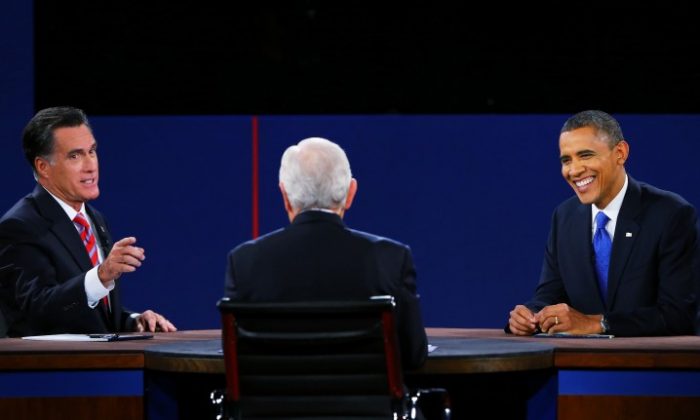 WASHINGTON—The two presidential candidates took very different approaches to the third and final presidential debate Monday night, but what was most critical was their political images and where they were aiming their appeal, according to political scientist Dr. John Hudak.

“President Obama was appealing to his base and going for turnout on Election Day,” he said, “Romney was still trying to convince people.”

After leveling the scores in last week’s debate, following a lousy first debate, President Obama came out swinging in the third debate at Lynn University in Florida, refuting Romney’s attempts to discredit his leadership on foreign policy while confronting the former Massachusetts governor on his position changes over the campaign.

“I think he scored points on that … pointing to what Romney had said before and saying how he changed his mind,” Smith said.

Romney rose to the challenge where he could, endeavoring to refocus the debate on the economy at home while challenging Obama’s success overseas.

Dr. Kathleen Kendall, research professor of communication at the University of Maryland, said that foreign policy is the president’s domain and in that respect, “The last debate was Obama’s to lose,” according to Kendall.

Obama made sure that that did not happen, however, exhibiting a depth of knowledge and expertise that Romney could not match, while projecting a clear image of a commander in chief.

“These debates are about more than a particular policy issue,” Kendall said. “Political image is also at stake, and I think in that sense he strengthened himself in a significant way.”

There were many factors involved in political image, she said, a number of which were at play last night.

One of those factors is competence, “Being very knowledgeable about an issue and how to deal with it, being seen as a leader who knows what to do,” said Kendall. Obama won on that count.

Other aspects of political image are goodwill, “smiling, patience, and tolerance as we perceive it, how they are doing in terms of being calm and pleasant,” according to Kendall.

Romney, in a complete turnaround from his previous aggressive stance in the first debate, exhibited calm and patience, avoiding quibbles with the moderator or speaking over the top of the president.

Surprising in his acquiescence to the president, he agreed with Obama on a range of controversial issues including the use of drones, withdrawing troops in Afghanistan and Iraq, the application of civilian diplomacy, and soft anti-terrorism programs like education and pro-development strategies rather than weapons.

Obama initially attempted to paint Romney as bellicose and as a warmonger, expecting to link him to Bush-era foreign policy, “but that didn’t work,” said Smith.

“Romney seemed to want to come off as a kind of peace candidate and be calm and less confrontational,” he said.

While he understood that Romney was endeavoring to elevate his political image to “appear presidential” and above “the battle,” Smith said that conservatives would be disappointed that Romney was not more critical and aggressive.

“They think the president is very vulnerable on foreign policy and they didn’t get that impression from Romney,” he said.

Although Smith was not convinced of the Romney strategy, he believes that conservatives will vote for Romney anyway. He attributed the change in approach to campaign strategy.

“I think his advisers probably told him to go after undecided voters and women, and that is what he was trying to do,” he added.

The women’s vote is seen as critical to both campaigns, highlighting the importance of political image at as the election draws closer.

Hudak is convinced that voter perceptions are now outweighing the economy as a deciding factor.

“I think swing voters want some sort of emotional or latent connection to the candidate and just want to feel good about who they vote for,” Hudak said.

While Romney is still trying to convince swing voters, and particularly women, Obama, realizing he has done what he can to establish his viability as a candidate, has “given up on undecided voters,” he said.

“Last night was a play for the base and a play to make sure people get to the polls,” Hudak said.

At this stage in the campaign,”it is much easier to get people who support you to go vote for you than to convince people who aren’t supporting you to do it,” he added.