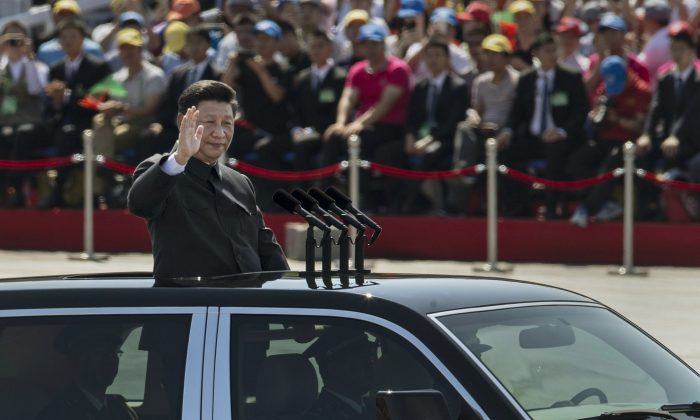 leader of the Communist Party Xi Jinping rides in an open top car as he greets soldiers and others in front of Tiananmen Square and the Forbidden City during a military parade on Sept. 3, 2015 in Beijing, China. Observers were surprised when former regime leader Jiang Zemin showed up on the reviewing stand with Xi. (Kevin Frayer/Getty Images)
China

At important ceremonial events in China since the 1990s, all eyes are usually trained on the man donning the mandarin-collared Mao suit, a garment reserved for the Communist Party’s most powerful publicly acknowledged leader.

As the top Party leadership strolled briskly out onto the Tiananmen rostrum on Sept. 3 to review a massive military parade, however, everybody’s gaze was fixed on the frail, pale figure in a regular business suit and maroon tie.

Positioned to the left of jet-black, sharply cut Mao suited Party boss Xi Jinping was his predecessor Jiang Zemin. At one point in the parade, the pair were spotted having what seemed like a brief, cordial chat.

The appearance of Jiang at a showcase parade meant to emphasize Xi’s mastery over the Party’s armed forces is the latest development in what many Chinese observers are calling a “death match” between two major Party factions—one helmed by current leader Xi Jinping, and the other by ex-leader Jiang Zemin. This development shows that the struggle hasn’t reached a resolution, and the ex-Party chief’s political future is far from secure, analysts said.

Jiang’s presence means that the “current political configuration hasn’t changed—the elders are still living under the same roof as current officials,” said Chen Pokong, a commentator and writer of books on China’s political culture, to an Epoch Times reporter over the telephone. “The fight will drag on.”

Shortly after assuming the position of Party chief in 2012, Xi Jinping purged hundreds of Chinese officials, several of them once thought untouchable, as part of a sweeping anti-corruption campaign. The campaign has been widely interpreted and proven to be a fierce effort by Xi to root out Jiang Zemin’s political network.

But Jiang Zemin’s moment in the bright Beijing sun is not a clear indication that Xi Jinping has pulled the brakes on his Party rectification drive.

“Just because Jiang and Zeng Qinghong showed up, however, doesn’t mean that they won’t be dealt with,” Chen said. Zeng, a former Politburo Standing Committee member and Jiang’s powerful enabler, has been tipped by columnists with the Chinese edition of Epoch Times to be the next Jiang ally to fall.

Chen continued, “Zeng is still in trouble—it’s possible they let him show his face, and then deal with him later.”

Retired Communist Party official Xin Ziling shares the same opinion. Xin is the former director of the editorial desk at the People’s Liberation Army’s National Defense University; he is well known for his outspoken views, and has previously been censored by Party leaders for accepting interviews with the foreign press. Recently, Party propaganda authorities have done nothing to silence him or limit his speech.

“Xi Jinping must have his considerations when he allowed Jiang Zemin to show up at the parade. The whole mechanism has not been changed, and nothing about Jiang has been publicly announced. So, Jiang’s public appearance doesn’t mean he is free and off the hook,” said Xin to an Epoch Times reporter.

Whether or not Jiang, 89, would show up at the military parade was the subject of much speculation by China watchers and citizens in light of a series of curious events in August. The parade was held to commemorate the 70th anniversary of World War II’s end.

On Aug. 10, Communist Party mouthpiece People’s Daily ran an editorial, which strongly hinted that retired Party leaders should stop clinging to power through their protégés in key political positions.

Analysts agree that the People’s Daily editorial was aimed at Jiang Zemin, who for over a decade after stepping down from official posts continued to wield immense power behind the scene through his associates occupying key political positions.

A little over a week after the editorial was published, an editor with the Chinese edition of Epoch Times learned through a source close to top Party leadership in Beijing that Xi Jinping had Jiang, his two sons, and former political enabler Zeng Qinghong temporarily “placed under control,” meaning that their movements have been briefly restricted.

Two or three days later, a stone stele bearing calligraphy by Jiang was removed from the patch of grass in front of the Communist Party’s main center of instruction for its cadres in Beijing. A Party school official said that the stone was moved to the inside of the campus as part of on-going renovations.

But in the black box of communist elite politics, every public gesture—an acerbic newspaper editorial, the moving of an innocuous stone, a parade review—is highly symbolic.

Jiang also has another problem to contend with, Xin Ziling said: the matter of 160,000 criminal complaints lodged against him by Chinese citizens, mostly in China, and most of whom have not been punished or harassed for their actions.

“The number is itself a foundation of the public will. It looks like now Jiang Zemin’s problem will very likely be dealt with through legal procedures. This is where there could be a breakthrough to solve the Jiang problem.”

Xin added, “Jiang has dug his own grave by persecuting Falun Gong and committing the crime of organ harvesting, which is a crime against humanity, when he ruled China for more than 10 years.” This refers to the suspected harvesting of organs, for sale, from at least tens of thousands of practitioners of Falun Gong, a traditional spiritual practice that Jiang began persecuting in 1999.

On the matter of the stone with Jiang Zemin’s calligraphy, Xin Ziling said: “The point is not about where the stone has been moved. The key is that the stone with Jiang’s inscription, which is an emblem of the school and a symbol of Jiang’s power, is not at the entrance of the Party school anymore. … This is a huge political signal.”

Matthew Robertson and Rona Rui contributed to this report.