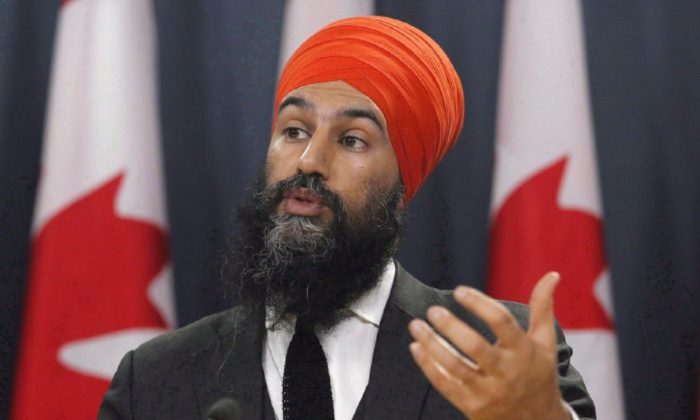 Political Fate of Singh, NDP, on the Line in Federal Byelections

OTTAWA—Jagmeet Singh’s political fate—and the fortunes of the New Democratic Party as a whole—are in the hands of voters today in a British Columbia riding.

The NDP leader is running for a seat in the House of Commons in Burnaby South, one of three federal ridings holding byelections today.

Many New Democrats believe it’s a do-or-die contest—that Singh cannot lead his party in this fall’s general election if he can’t get himself a seat in Parliament.

Singh is hoping a victory tonight will give him much-needed visibility in the Commons in the run-up to the national vote in October, and put to rest grumbling within the NDP about his underwhelming performance since being chosen leader almost 18 months ago.

But Singh’s problems go well beyond his lack of visibility on the main stage of federal politics. The former Ontario provincial politician has faced criticism about his seeming unfamiliarity with federal issues and his handling of internal caucus matters—particularly his decision to kick Saskatchewan MP Erin Weir out of caucus for alleged misconduct, which has infuriated many NDP stalwarts in the province seen as the cradle of the party.

Under his leadership, the NDP has plunged to its lowest standings in public opinion polls since 2000, when it won just 13 seats. The party is mired in debt and its fundraising is sluggish. At least 11 of the 44 MPs who won seats for the party in 2015 have announced they won’t seek re-election this fall.

The NDP leader is running for a seat in the House of Commons in Burnaby South, one of three federal ridings holding byelections today. https://t.co/VgYhgCcCKW

While many NDP eyes will be glued to Burnaby South tonight, an arguably better gauge of the party’s election-year viability will be going on in Outremont—the Montreal riding vacated last summer by Singh’s predecessor, Tom Mulcair.

The riding had been a Liberal stronghold until Mulcair scored an upset in a 2007 byelection. His victory turned Outremont into a beachhead for the NDP, which helped to launch the so-called orange wave that swept the province in 2011 and boosted the party to official Opposition status for the first time in its history. While the party held onto just 16 Quebec seats in 2015, Quebec MPs still make up more than a third of the NDP caucus.

The betting among political insiders is that the Liberals will retake Outremont, which would be a welcome boost for the governing party’s morale in the midst of the SNC-Lavalin controversy—and a particularly bitter loss for the NDP. The symbolism of losing their erstwhile beachhead would only reinforce polls suggesting New Democrats are in danger of being wiped out altogether in Quebec this fall.

But the blow would be softened, at least, if Singh is able to capture Burnaby South.

Political fate of Singh, NDP, on the line in federal byelections https://t.co/VMRm9V8gWj pic.twitter.com/jwONQFdCPL

It’s no sure thing. The B.C. riding is not a natural home for Singh, who formerly represented Brampton in the Ontario legislature. Nor is it a safe NDP riding: New Democrat Kennedy Stewart, who resigned to become mayor of Vancouver, took the riding in 2015 with just over 600 votes more than his Liberal opponent, with the Conservative candidate not far behind.

While the byelection is thought to be a three-way race, being a party leader should give Singh an edge. The fact that the Green party has chosen not to run a candidate should also help.

Moreover, the Liberals did themselves no favors by dumping their original candidate amid controversy over her suggestion that Singh being of “Indian descent” could help her win. The current Liberal contender, Richard T. Lee, could face headwinds of a different kind, created by the ongoing furor over allegations that the Prime Minister’s Office pressured former attorney general Jody Wilson-Raybould—who represents a nearby Vancouver riding—to halt a criminal prosecution of SNC-Lavalin.

The third byelection is being held in the Ontario riding of York-Simcoe, left vacant by the retirement of Peter Van Loan, who had held the seat for the Conservatives since 2004. He won with a healthy 50 percent of the votes in 2015, and the Tories are expected to easily hang on tonight.

All three contests will give the Conservatives a glimpse of what, if any damage, they might sustain from the advent of the breakaway People’s Party of Canada, formed by one-time Tory leadership contender Maxime Bernier. The byelections mark the first time Bernier’s fledgling party will actually be put to an electoral test.