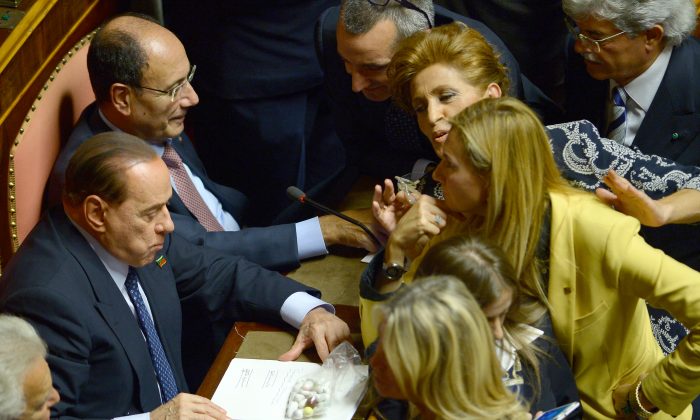 Silvio Berlusconi (front, L) and senators from his People of Freedom Party at the Senate in Rome, Italy, Oct. 2, 2013. (Filippo Monteforte/AFP/Getty Images)
Europe

Political Exile in Sight for Berlusconi

BARI, Italy—He has been the dominant voice in Italian politics for nearly two decades. But Silvio Berlusconi appears to have now run out of political lives.

The 77-year-old media mogul, who served four times as Italy’s prime minister, is struggling to survive politically while preparing to serve a one-year sentence.

An attempt by Berlusconi to overthrow the government earlier this month was disrupted by a rebellion within his People of Freedom (PDL) party. Twenty-three senators sided with Prime Minister Enrico Letta and his fragile coalition government in a confidence vote on Oct. 2.

A senate panel recommended earlier this month that Berlusconi should be expelled from the senate over his tax fraud conviction. A vote in the full senate—which could seal Berlusconi’s political fate—is expected later this month.

Berlusconi was due to start serving a one-year sentence for tax evasion on Oct. 15. It’s his first conviction, despite having been put on trial over a dozen times. Last Friday his lawyers requested for him to serve one year of community service, instead of a year under house arrest—which was already reduced from four years.

Apparently it will take at least six months for authorities to decide how Berlusconi will pay off his debt to society, as delays in the Italian judiciary’s bureaucratic process are notorious.

Support for Berlusconi Despite Rebellion

Berlusconi, known for his political maneuvering, was like a king in check trying to tilt over the chessboard board ahead of the confidence vote, when he threatened to take down his ministers if he’s expelled from the Senate—a position that has allowed him to divert several prosecutions against him.

Although the senators rebelling against Berlusconi halted his hand, and prevented the government from collapsing, almost none of them want to see their historic leader go.

It was the “right choice” to be responsible for the country, said one of the 23 dissident senators, Andrea Augello, in an interview with Epoch Times.

Another dissident senator, Francesco Colucci, said that he wants “a leadership [for the party] that is receptive … to the grassroots.” And that there’s also a need to “review the functions of the leadership group.”

Nevertheless, both senators interviewed by Epoch Times still see Berlusconi as an essential part of the People of Freedom party.

“In any scenario there will be only one person” who will drive the party, officially or not. “And his name is Silvio Berlusconi,” Colucci said.

“This is not the time” to attack Berlusconi, Augello said. “A worthy person” doesn’t attack someone who is in trouble, he added.

Under Italy’s current electoral law, citizens vote for the party and not for a president. It gives the head of the party the power to appoint party members to positions of power.

According to Alessandro Lattarulo, professor of sociology and politics at the Aldo Moro University of Bari, that rule is restraining members in Berlusconi’s party, as making any move that would be too drastic could exclude them from parliament.

If stripped from his seat, Berlusconi could still rule his party from outside parliament—depending on how many senators would remain loyal to him.

Also, People of Freedom party members “are all so-called professional politicians who would hardly accept” being taken out of the Parliament, Lattarulo said.

So what will happen to Berlusconi’s party? According to some experts, Italy’s rightwing politicians will probably split into three parties: one would be more moderate; the second, the Go Italy party that Berlusconi wants to reestablish; and the third, a more rightwing party led by Gianfranco Fini—a previous ally of Berlusconi who left the People of Freedom Party in 2010.

The different parties, as Lattarulo sees it, would be allies and could attract the support from both the Italians that are still faithful to Berlusconi and those who lost their confidence in the long-term leader of center-right forces.