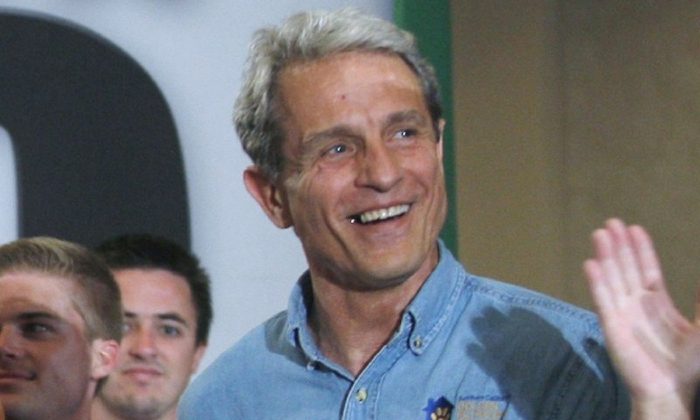 Ed Buck, a donor to Democrats, was arrested late Sept. 17 after a third man overdosed at his home in California.

Buck, 65, was charged with operating a drug house, battery causing serious injury, and providing methamphetamine to a 37-year-old man who suffered a drug overdose last week, according to the Los Angeles County District Attorney’s Office.

Prosecutors said Buck injected the victim with meth at his apartment in West Hollywood on Sept. 11. The man overdosed but survived.

Buck first injected the man on Sept. 4. The man became concerned he was going to overdose and left to get medical treatment, but returned to the apartment a week later when Buck allegedly injected him again. Prosecutors say Buck blocked the man from seeking help, prompting the victim to eventually escape the residence and call 911 from a nearby gas station.

“I remain deeply concerned for the safety of people whose life circumstances may make them more vulnerable to criminal predators,” Los Angeles County District Attorney Jackie Lacey said in a statement.

“With this new evidence, I authorized the filing of criminal charges against Ed Buck.”

Prosecutors have asked the judge to set bail at $4 million.

If convicted, Buck faces up to five years and eight months in state prison.

Previously, two other men were found to have overdosed and died in Buck’s apartment.

The first man, 26-year-old Gemmel Moore, who was found dead in July 2017, had written in his journal that Buck was “the one to thank” for his becoming addicted to drugs.

The second man, who died in January, was identified as Timothy Dean, 55. Protesters gathered around Buck’s house on Jan. 7 to press for police action, as Buck wasn’t arrested in July 2017 after the death of Moore, despite a search of the apartment uncovering drug paraphernalia, including some two dozen syringes and five glass pipes.

According to court papers obtained by the Los Angeles Times, prosecutors said after Buck’s arrest on Sept. 17 that Buck enticed men into his house using drugs and money.

“From his home, in a position of power, Buck manipulates his victims into participating in his sexual fetishes,” prosecutors wrote in court papers about the openly gay man. “These fetishes include supplying and personally administering dangerously large doses of narcotics to his victims … Not deterred by the senseless deaths of Moore and Dean, the defendant nearly killed a third victim last week.”

“The full scope of his consistent malicious behavior is unknown,” prosecutors said. “It is only a matter of time before another one of these vulnerable young men dies of an overdose.”

Buck has been a donor to a number of Democratic lawmakers and candidates. In 2008, he donated to then-Sen. Barack Obama and former First Lady Hillary Clinton for their presidential campaigns. He has also donated to Rep. Ted Lieu (D-Calif.), Los Angeles Mayor Eric Garcetti, and Rep. Adam Schiff (D-Calif.)

Some lawmakers who have received donations from Buck have sought to distance themselves from him.

Rep. Karen Bass (D-Calif.) released a statement after the first death in 2017 admitting she received $250 from Buck but said she didn’t know him.

“What I am hearing and reading about his conduct with Gemmel is deeply disturbing. If there are other victims, they should come forward immediately. It is my hope that law enforcement is prepared to investigate and prosecute to the fullest extent of the law. My thoughts are with the friends and family of Gemmel this evening,” she said.