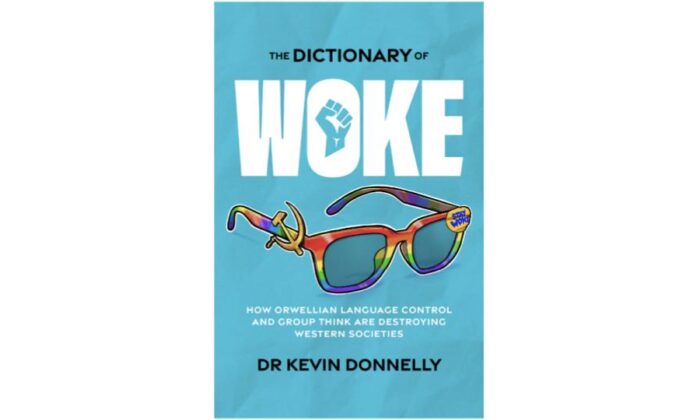 While political correctness may disguise as a form of politeness and civility, it’s a type of language control and groupthink now dominating the Western world, an Australian educator and commentator Kevin Donnelly argues in his latest book “The Dictionary of Woke”, published in September.

Donnelly, one of Australia’s leading conservative public intellectuals, said that political correctness poses an “existential threat” to the foundations of Western civilisation, including concepts like freedom of expression and religious freedom.

In the U.K, Europe, the US, Canada, Australia or New Zealand, “not a week goes by without yet another example of books being banned, ideas being censored, the past being rewritten, statues being demolished and authors and academics being vilified and publicly shamed,” he wrote.

“We have entered an Orwellian world like 1984 where Big Brother and the Party control how citizens think and where anyone who questions the thought police is victimised, punished and silenced.”

Some have argued that political correctness, which is now rebadged as being woke, helps to prevent discrimination and prejudice. However, Donnelly said they usually ignore the fact that according to the Human Freedom Index 2020 published by the Cato and Fraser institutes, Western nations, including the Five Eyes nations, are considered the freest based on characteristics such as the rule of law, personal security and freedom of movement, speech, religion and assembly.

“While PC pretends to be about overcoming disadvantage and promoting equity and freedom, the reality is it is underpinned by radical, cultural-left ideology that can be traced back to neo-Marxism and the emergence of critical theory,” he wrote.

Critical theory aims to overthrow the status quo, whether freeing those believed to be oppressed by capitalism, racism, sexism or a binary sense of gender, and commence a new era of so-called equality and freedom for all.

Meanwhile, neo-Marxism, another name for cultural Marxism, proposes a silent and steady subversion of society, eventually eroding the economy, social structures and moral fabric, as opposed to the traditional Marxist theory, which promotes the use of violence to take control.

In the West, where the prosperity and freedom that people experience means there’s little chance of the disaffected using violence to take control, “the focus of the revolution shifted from the economy to what has become known as the culture wars,” Donnelly argued.

This primarily manifests as the sweeping cultural changes in the 1960s, such as the counter-culture movement, the hippy, the emergence of radical feminism, the anti-war movement, and the sexual revolution brought about by the birth control pill or the Dionysian culture of immediate physical gratification.

“The end result was long held, and accepted beliefs and institutions were attacked and undermined,” the author noted.

Due to the dominance of critical theory and political correctness, literary texts are “critiqued in terms of power relationships associated with gender, ethnicity and class,” and history tends to ignore the grand narrative associated with the rise and evolution of Western civilisation, Donnelly argued in his book.

“In schools and universities, as a result of neo-Marxist inspired critical race and post-colonial theories, students are taught Western societies are inherently racist, there is nothing beneficial about Western civilisation and, if they are white, told they must atone for past crimes committed against People of Colour (POC) including exploitation, cruelty, slavery, dispossession and genocide.”

“Such is the insidious and dangerous impact of critical race theory on schools American parents are orchestrating campaigns, and state governments are now legislating to ensure a balanced and impartial curriculum.”

Some examples of literary classics being cancelled or condemned, Donnelly wrote, “include Huckleberry Finn (using the word nigger), To Kill a Mockingbird (promoting white saviour complex), Moby Dick (environmental damage of killing whales) and Lord of the Flies (all the characters are white, male and privileged).”

Under the influence of woke ideology in Australia, students are presented with a sanitised picture of Indigenous histories and cultures. Meanwhile, the dark side of Western civilisation, such as slavery and the stolen generation, is emphasised, and the impact and significance of Judeo-Christianity are “treated in a superficial and fragmented fashion.”

This is despite Australia owing much to Western civilisation and Judeo-Christianity, the author said.

“Cultural relativism and identity politics prevail, ignoring the reality that Australia’s political and legal institutions and much of our language, literature, music and art are inherited from Europe and Ireland and the United Kingdom.”

“While the numbers are diminishing, it’s also true Christianity is Australia’s mainstream religion and the nation’s political and legal institutions and way of life are indebted to Christianity.”

More information about ‘The Dictionary of Woke’ could be found here.