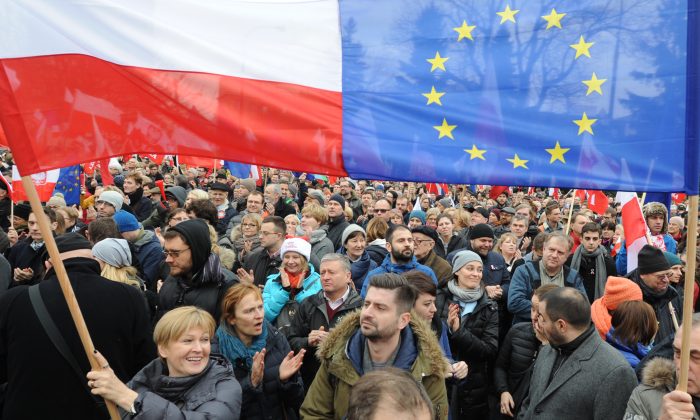 Protesters wave Polish and European Union flags during an anti government demonstration in Warsaw, Poland, on Dec. 19, 2015. Thousands of Poles participated in demonstrations across Poland to protest moves by the new right-wing government to neutralize the Constitutional Tribunal as a check on its power. (AP Photo/Alik Keplicz)
Europe

Polish PM: Protests Being Led by Politicians Who Lost Power

WARSAW, Poland—Anti-government protests in Poland over the past two weekends are the work of opposition members angry about being ousted from power and losing their privileges, the country’s prime minister said Sunday.

Tens of thousands of people have demonstrated across Poland on the last two Saturdays to protest moves by Prime Minister Beata Szydlo’s new right-wing government to reduce the ability of the constitutional court to be a check on the government’s power. Protesters are calling those actions a threat to Poland’s democracy.

In an interview with TVN24, Szydlo denied that Poland’s 26-year-old democracy was under threat.

“I would like those who demonstrate to think through if the slogans which they voice—that is, about the protection of democracy and freedom—match the reality that we are all living in,” Szydlo said.

“Those organizing the protests are those who lost power, privileges and influence,” Szydlo said. “Politicians are marching at the head” of the protests.

Several opposition lawmakers did march but the organizer of the rallies, the Committee for the Defense of Democracy, insists it is a citizens’ initiative that does not work for any political party.