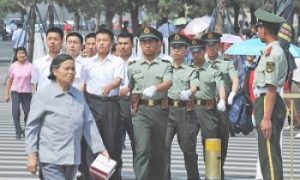 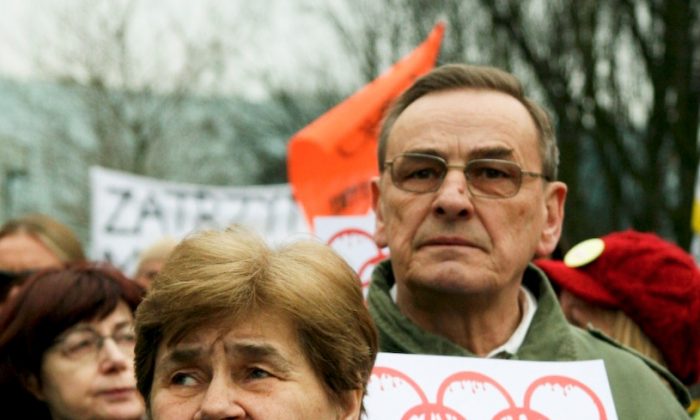 Zbigniew Romaszewski, Assistant Speaker of the Polish Senate and perennial Human Rights activist, with his wife Zofia, also a famed Polish Solidarity activist, at a rally supporting Tibet in front of the Chinese Embassy in Warsaw on March 16, 2008 (Jan Jekielek/The Epoch Times)
China

WARSAW—Many methods can be used to voice a country’s displeasure towards an Olympic host, especially if that host is a grievous human rights violator. A total boycott is not the only way, said Polish parliamentarian Karol Karski at a press conference on March 17. The Polish government, he argued, could choose not to go to Beijing 2008, while still allowing athletes to attend.

Karski has mobilized the opposition Law & Justice party’s parliamentary association to call for a joint sitting of the Foreign Affairs and Sports & Physical Culture committees of the Sejm (the Polish parliament) to examine this very question. The verbose title of the proposed hearing makes it plain: A discussion of the situation surrounding the organizing the of 2008 Olympics in the People’s Republic of China (PRC), a nation which violates human rights and the principles contained in the Olympic Charter.

The initiative would make Poland’s Sejm the first parliament in the world to make an official, public assessment of its country’s role at the Beijing Games. A date for the hearing is expected to be set in the next couple of days, officials say.

According to Karski, the participation of Polish government functionaries such as Ministers at the Olympics would construe “a kind of support for the PRC government’s activities” such as the ongoing violence perpetrated by the Chinese military on the people of Tibet.

Concurrently, a group of Polish parliamentarians that were in the political opposition to Poland’s communist leaders in the 1980’s have launched an appeal to the PRC.

“With respect to the Beijing Olympics, we declare that the PRC is a dictatorship, in which human rights are violated, in particular citizens’ rights, religious rights as well as the rights of ethnic minorities, violations as in the case of present-day Tibet,” highlighted the appeal, led by Assistant Speaker of the Sejm Stefan Niesiołowski.

The appellants, who include perennial Solidarity activists such as parliamentarian Andrzej Czuma, hope to mobilize people from all walks of life including Olympic athletes to “undertake all sorts of actions to aid in the release all political prisoners in the PRC, as well as [in developing] respect for human and citizens’ rights in that country.” They stop short of calling for an all-out boycott of the Games.

The Polish Parliamentary Group on the Question of Tibet took a stronger stance. In a letter addressed to the PRC ambassador in Poland Chin Sun Rongmin, the Group states “it is not yet too late to consider an international boycott of the Beijing Olympics,” considering the current “wave of repression” in Tibet.

Calling Beijing to account for its human rights violations is not a new thing in the Sejm. Five months earlier at a parliamentary conference on human rights in China vis-a-vis the Beijing Olympics , a number of speakers and organizations spoke out. The Polish Transplant Sports Association (PTSA), the World Solidarity coalition, and The International Society for Human Rights (ISHR), one of the event co-organizers, all took strong positions against the holding of the 2008 Games in Beijing.

How to Shame an Olympic Host

Last Month, Holland’s Christian Union Party, part of the government coalition, called for a boycott of the opening ceremonies of the Beijing Olympic Games, citing Beijing’s gross human rights violations as the cause.

There have been boycotts or nations barred from participating in the Games for human rights violations consistently since 1956 including four years of boycotts and the barring of South Africa from 1964 until 1992 due to the racist policy of apartheid.

The most famous and widespread boycott was in 1980 when Moscow hosted the games after the Soviet invasion of Afghanistan. The U.S. implemented a full boycott, urging the world to do the same, to which there were a variety of responses.

Between 45 and 50 countries joined the boycott including many influential ones such as Canada and Japan. Some governments, such as Great Britain and Australia, officially supported the boycott but gave athletes the choice to go or not, many of whom stayed home. Other countries chose milder yet still symbolic methods, such as the Olympic ceremonies boycott suggested for the 2008 Games. Several nations competed under the Olympic flag rather than their own, as a means of voicing their disapproval.

Of the countries that chose a total boycott in 1980 for political reasons, one nation stands out: The People’s Republic of China itself.