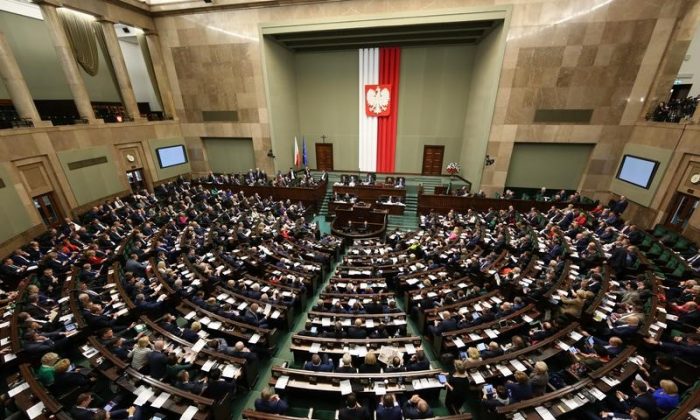 The Assembly hall of the lower house of the Polish Parliament (Sejm) in Warsaw, Poland. On Nov. 24, 2017, the Sejm passed a resolution condemning the ideology and consequences of the Bolshevik Revolution. (Krzysztof Białoskórski/ Chancellery of the Sejm).
The Dead End of Communism

The resolution concisely traces the effects of communism on the world, from the Bolshevik Revolution to the present day, with special emphasis on its effects on Poland.

The resolution begins: “The Bolshevik Revolution that broke out in Russia 100 years ago in November 1917 changed the face of this country and later a considerable part of the world, and its tragic social and economic consequences have been felt in many countries and in Russia itself to this day.

“Every revolution carried out by a bloody coup brings with it destruction and death. Extreme left-wing revolts, though often covered by beautiful and high-pitched slogans, always lead to terror and crime and harm individual people and entire societies. The blade of aggression of the Bolshevik revolution was aimed against the basic values of humanity and the traditions of European civilization. Born from the criminal ideology of communism, fueled by anti-humanitarian and anti-Christian slogans, it has left its cruel mark on the lives of many generations”

Communism’s Beginnings in the Bolshevik Revolution

“The Black Book of Communism” reports on the bloody beginnings of communism in Russia, as the coup of Nov. 7 led by Vladimir Ilyich Lenin was followed by a very violent phase. “This violence was imposed on the Party by Lenin himself as soon as it seized power,” wrote Stephane Courtois, one of the authors of this book.

“Lenin’s primary objective was to maintain his hold on power for as long as possible,” wrote Courtois. “Lenin established a dictatorship that quickly revealed itself to be both bloody and terrorist in nature.”

“Caught between the will to apply his doctrine and the necessity of retaining his grip on power, Lenin created the myth of a worldwide Bolshevik revolution. In November 1917 he wanted to believe that the revolutionary fire was going to engulf all countries involved in the war, and Germany above all others. But a worldwide revolution did not come about, and after Germany’s defeat in November 1918, a new European order emerged… This was already obvious when the Red Army was defeated in Warsaw in 1920,” wrote Courtois. The Soviet Army invaded Poland in 1920 in order to spread the Bolshevik revolution to the West.

The resolution comments on this history, and how Poland stopped further communist expansion to the West: “One of the greatest victims of the Bolshevik revolution was Poland. In 1920 Polish soldiers through their fortitude were able to stop the progress of the revolution in Europe.”

“The failure of the Leninist theory of European and worldwide revolution left the Bolsheviks quite isolated and in a head-to-head conflict with an increasingly anarchic Russia. In a desperate attempt to hold onto power, the Bolsheviks made terror an everyday part of their policies, seeking to remodel society in the image of their theory, and to silence those who, either through their actions or by their very social, economic, or intellectual existence, pointed to the gaping holes in the theory. Once in power, the Bolsheviks made Utopia an extremely bloody business,” wrote Courtois.

Communism went on the offensive again in 1939, with Poland the battleground and the rest of the world on the sidelines.

The resolution says: “However, when in 1939 communists allied with the national socialists a hecatomb could no longer be prevented, all the more so as many countries of the civilized world still indifferently accepted the demagogy of the Germans and with applause the hypocritical propaganda of the Soviets.”

In August 1939 Germany and the Soviet Union signed a non- aggression pact, called the Molotov–Ribbentrop Pact. The pact contained a secret protocol in which the two allies divided the lands between Germany and USSR into their spheres of influence. The next month their armies both invaded Poland and met at a demarcation line.

The British-Polish historian Norman Davies writes in his article “Britain and the Warsaw Rising” that in 1945 at the Yalta Conference, “Western leaders abandoned all effective influence in Poland and Eastern Europe in return for Stalin’s co-operation in Germany and in the Far East.”

The Yalta agreement gave free rein to the spread of communism in Poland and Eastern Europe, as stated in the resolution: “From 1945 the importation of communist revolution to many countries within and outside Europe had become possible as a result of the misguided policy of the anti-German coalition of allied Western powers. Hundreds of millions of the victims around the world were added to the millions of the Bolshevik Revolution victims, and the horrific effects of communist economic experiments have ruined the economies of dozens of countries around the world.”

The concluding sentence of the resolution reads: “The Sejm of the Republic of Poland condemns the ideology that led to the tragedy of many millions of people and pays homage to all the victims of the Bolshevik Revolution.”

The resolution was adopted with 283 votes in favor, and 4 abstentions. However, 173 deputies did not participate in voting, objecting to language in the resolution regarding “extreme leftists.” The majority of those not voting belonged to the Civic Platform Party and the Modern Party.

Rafal Grupinski, a Civic Platform deputy, in his speech during a session of the Polish parliament brought up an example that explained the party’s proposed amendment to the resolution. He said: “1905—the extreme leftist revolution began with Bloody Sunday in St. Petersburg. Then there were hundreds of victims in Warsaw, Lodz, etc. What was the effect? Restoration of the Polish language in schools… restoration of the Polish language in municipalities, the possibility of publishing newspapers, creating associations. The left is not just a disastrous card in the European history.” The amendment, however, was rejected by the Committee on Culture and Media.

Piotr Babinetz, a deputy representing the Law and Justice party, said that the draft of the resolution was a result of the joint efforts of his party and the Civic Platform party. He also said that the revolution in 1905 was socialist and leftist but not extreme leftist and it preceded the Bolshevik revolution.

According to Babinetz the extreme leftist revolts the resolution refers to are, for instance,  movements inspired by Che Guevara that commit murders. The majority of the deputies representing the Law and Justice party participated in voting, and those who participated voted in favor of the resolution.

Mikolaj Jaroszewicz contributed to this report.