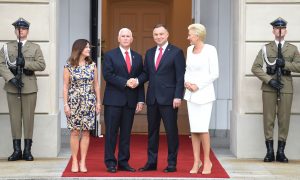 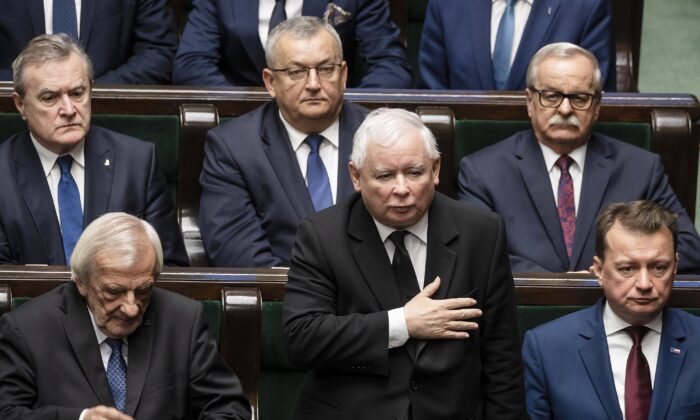 The leader of Poland's ruling Law and Justice party, Jaroslaw Kaczynski, center, swears in as a member of the parliament during a gala inauguration of a new four-year term of the national parliament in Warsaw, Poland, Nov. 12, 2019. (AP)
Europe

WARSAW, Poland—Poland’s opposition parties elected their candidate as speaker of the Senate on Nov. 12, a small victory for them that allows them to act as a check on the power of the populist right-wing ruling party.

Sen. Tomasz Grodzki was elected speaker in a 51–48 vote with one abstention during the first sitting of the newly elected party. Grodzki hailed the move as a victory for democracy. Until the Nov. 12 vote, it wasn’t certain that the opposition parties would manage to take control of the Senate.

For the past four years, the ruling Law and Justice party has put through a series of laws giving it much greater power over the judicial system. The European Union has often expressed its concerns that the party was eroding judicial independence, warning that the rule of law in the young democracy was on the line.

In many cases, with control of both houses of Parliament, the party would rush through laws without allowing opposition lawmakers any say.

Now, the Senate will be able to slow down, though not block, the passage of laws. Perhaps even more importantly, the Senate has the power to appoint the heads of some key state bodies and the opposition—if it maintains its majority—will be able to block the nominations of some ruling party loyalists.

The Law and Justice party has been trying to win over some of the opposition members in the Senate, but has so far failed.

Earlier on Nov. 12, the lower house of Parliament also named its speaker—Elzbieta Witek of Law and Justice.

President Andrzej Duda opened the first day of Parliament’s four-year term with a speech that paid homage to Poland’s tradition of being a land of tolerance and a place where many ethnic and religious groups lived for centuries in relative harmony. He also paid tribute to Roman Catholicism and strong family traditions that he credited with preserving the social fabric over a difficult history.

The parliamentary election on Oct. 13 gave a second-term Law and Justice party, which won nearly 44 percent of the votes, the highest percentage of any party since Poland returned to democracy 30 years ago.

But the election also created some complications for the party and its 70-year-old leader, Jaroslaw Kaczynski, as it continues its plans to reshape the nation.

Aside from the loss of the Senate, the ruling party must now contend with the fact that a far-right party, Confederation, got almost 7 percent of the vote, winning 11 seats in the assembly.

Law and Justice had sought to prevent any party arising in Parliament to its right. That strategy had led Kaczynski and other leaders to try to appeal to the far right, and they even marched with them on Independence Day in 2018.

In another change, a left-wing alliance won 49 seats, after a hiatus of four years, after getting nearly 13 percent of the vote.