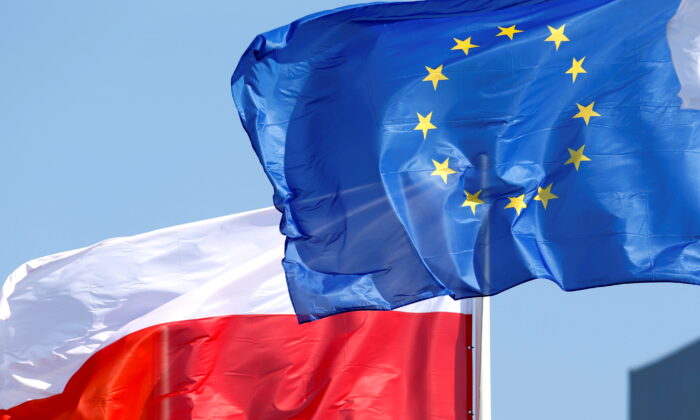 The Polish Constitutional Tribunal ruled on Oct. 7 that some of the European Union’s (EU) laws conflict with the country’s constitution and that national laws will have supremacy over those of the EU in areas where they clash.

The decision of the tribunal was filed on a motion by Polish Prime Minister Mateusz Morawiecki, who requested a review earlier this year on a ruling by the European Court of Justice in March that said Poland’s new regulations for appointing judges to the Supreme Court could violate EU law.

“The attempt by the European Court of Justice to involve itself with Polish legal mechanisms violates … the rules that give priority to the constitution and rules that respect sovereignty amid the process of European integration,” the tribunal said.

Two of 14 judges who considered the case dissented from the majority opinion. The ruling said on Oct. 7 that some provisions in the EU’s treaties go against the Polish constitution, a move that was criticized by the European Commission (EC).

The tribunal’s majority said that Poland’s EU membership did not give the European Court of Justice supreme legal authority and did not mean that Poland had shifted its law sovereignty to the EU.

EC President Ursula von der Leyen said in a statement on Oct. 8 that she is “deeply concerned” by the tribunal’s decision.

“The EU is a community of values and laws. This is what binds our Union together and makes it strong,” von der Leyen said. “EU law has primacy over national law, including constitutional provisions.”

The ruling followed months of court proceedings in which representatives of Poland’s government, president, and parliament argued that Poland’s constitution comes before EU law and that rulings by the European Court of Justice sometimes conflict with Poland’s legal order.

Poland’s government insists that the justice system and the judiciary are the sole purviews of EU member nations and not the EU.

The Constitutional Tribunal itself is seen by the EU as illegitimate due to the political influence of Poland’s Law and Justice (PiS) party government on the appointment of some of its judges. Many of them are government loyalists, including the court’s president.

Speculations that Poland could eventually leave the bloc were opposed by Morawiecki in a statement, saying the country’s entry in May 2004 “is one of the highlights of the last decades.”

“We have the same rights as other countries … and that’s why we don’t agree to be treated as a second-class country,” he added. “We want a community of respect, not an equal and equal association. This is also our community, our union. That’s the kind of union we want and that’s what we will continue to create.”