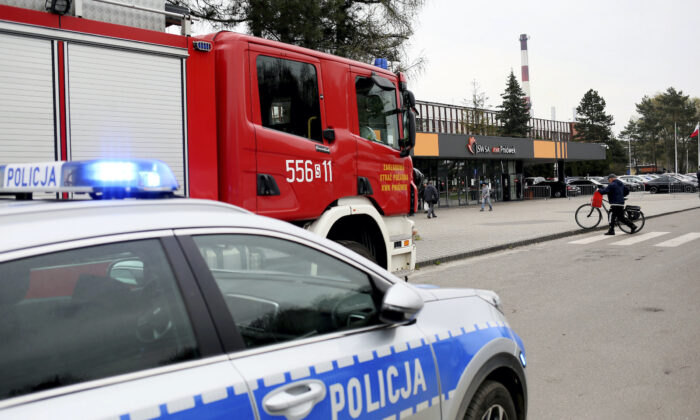 A police car and a firefighters' truck before the Pniowek coal mine in Pawlowice, southern Poland, on April 20, 2022, where two underground methane explosions killed five people and injured more than 20 early Wednesday. (AP Photo)
Europe

Polish Coal Mine Blast Kills Five, Others Trapped in Shafts

WARSAW—Five people died and seven were trapped in a coal mine in southern Poland, the prime minister told reporters on Wednesday, in what he said was a “terrible tragedy” caused by an explosion in the early hours of the morning.

Owner JSW said the methane explosion at the Pniowek coal mine in Pawlowice happened shortly after midnight at a depth of 1,000 metres (3,300 feet). A total of 42 miners were in the area at the time, 21 of whom were transported to hospital, it said.

Morawiecki said rescue workers had been cut off by a second explosion in the mine at around 3 a.m and that a rescue worker was among the dead. He said officials were trying to decide when it would be possible to enter shafts where people were trapped.

“We know that five people have died and seven people are trapped,” Prime Minister Mateusz Morawiecki said. “This terrible tragedy shows that the life of a miner is not only a huge effort, but also a great risk.”

“The whole of Poland has deep compassion and sorrow for what happened,” he added.

JSW said 13 teams were involved in the rescue, but that efforts had been put on hold temporarily to allow a dust barrier protecting the rescue base to be rebuilt. It added that the families of the miners affected were being helped by psychologists.

Most of the injured suffered from burns, doctors told reporters.