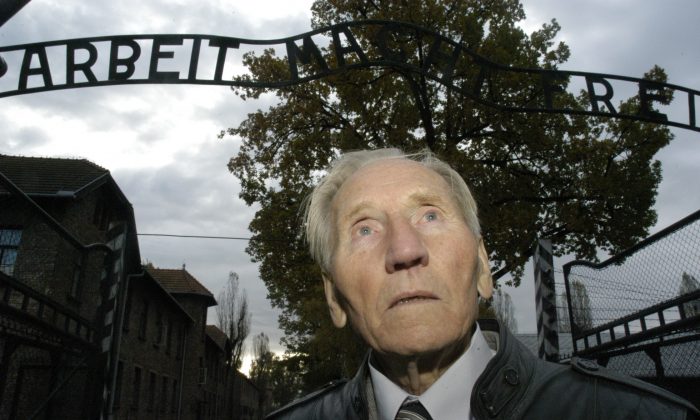 Kazimierz Piechowski, the sole survivor of the first successful escape from Auschwitz, in the documentary “The Runaway.” (Courtesy of Marek Pawlowski)
Entertainment

Polish and Ukrainian Courage at Auschwitz

Originally, the National Socialists commissioned Auschwitz to hold Polish POWs and prisoners of conscience. An estimated 130,000 to 140,000 perished there due to starvation and inhumane treatment.

Another 15,000 Soviet POWs were also imprisoned there, a substantial percentage of whom were in fact Ukrainians, according to the historical context provided by Rutgers professor Alexander Motyl before a recent screening of Marek Pawlowski’s “The Runaway” at the Ukrainian Institute of America.

Given the film’s subjects and the co-sponsorship of the host institute, the Polish Cultural Institute, and the Ukrainian Film Club of Columbia, the theme of Ukrainian-Polish cooperation was often expressed.

It is not hard to understand why the three cultural organizations shared an interest in the Polish Pawlowski’s documentary. It tells the story of the filmmaker’s countryman, Kazimierz Piechowski, the sole survivor of the first successful escape from Auschwitz.

It was a risky plan largely formulated by Ukrainian Yevhen “Gienek” Bendera, perfectly executed by the former mechanic, Piechowski, and their two Polish comrades. However, their clean getaway was just the beginning of the story.

Initially, Piechowski seemed likely to share the tragic fate that befell his fellow escapees. As was the case for most veterans of the Polish Home Army after the war, Piechowski found himself consigned to a communist prison on trumped-up charges.

While his 10-year sentence was considered relatively light, he endured regular torture sessions throughout his incarceration. When he was finally released, Piechowski went back to the only civilian job he had known in the Gdansk shipyards. Right from there, everyone should have a rough idea of how the story unfolds.

Surprisingly, a good portion of “Runaway” celebrates Piechowski’s resiliency and modest triumph over two of the 20th century’s most oppressive ideologies.

Evidently, Piechowski and his beloved wife longed to travel the world during the dark days of communism, so now they do as wonderfully spry senior citizens.

Frankly, it is rather refreshing to get some spiritual uplift in a film that covers both the National Socialist concentration camps and the years of Stalinist oppression. Indeed, Pawlowski pulls off quite a neat trick in that respect.

Visually, “Runaway” has a bit of a television production look, but the scenes of Piechowski revisiting the notorious concentration camp are powerful nonetheless. As it happens, Pawlowski’s documentary has had significant television airtime in both Poland and Germany (which is a particularly good thing).

Without question, Piechowski is an inspiring figure, well worth meeting on-screen. Clocking in at a disciplined 56 minutes, “Runaway” will broaden many viewers’ perspective on the harrowing realities of both regimes he outlived.

It also serves as a reminder of the tragic legacy shared by Poland and Ukraine that will hopefully lead to greater friendly solidarity for the two countries.

Recommended for anyone who might have an opportunity to see it at a festival or academic venue, Pawlowski’s “The Runaway” really deserves a spot on PBS’s schedule.