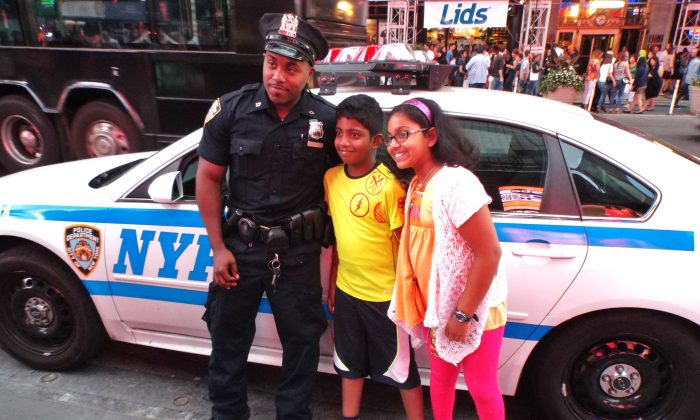 During a walk through Times Square on a recent Saturday evening, I was greatly impressed with expressions of respect and vigilance by members of the NYPD.

Assigned to the crossroads of the world, the NYPD serves not only New Yorkers but also visitors from throughout America and the world.

The NYPD officers also reflected diversity, one of the great treasures of American society. Diversity within the rank and file is priceless to police departments and the communities they protect and serve.

Earlier on that Saturday, I followed coverage of NYPD officers assigned to the march of over 2,500 people through Staten Island to protest the death of a man being taken into police custody on July 17.

Despite the controversy of this tragedy, the service of the NYPD—as well as the orderliness of the protesters—was honorable. The event respected police–community dynamics highlighted by Sir Robert Peel, the father of modern policing:

During the protest, dozens of NYPD officers were present in soft-style uniforms consisting of polo shirts, pants, and baseball hats. Although some were also present in the traditional NYPD formal blue uniforms, there was no riot gear and there were no arrests.

America is experiencing challenging times due to incidents of violence in communities, schools, workplaces, military bases, and even places of worship.

Compounding horrific incidents such as Columbine and Newtown that have received international attention, headlines throughout the nation continually present an alarming commentary on violence. These are only some during the month of August:

Police are also victims of violence. On Aug. 24, a Texas police chief was shot to death during a traffic stop that went awry.

Violence affects the people and the police. All of us must work together to turn the tide.

For many years, I have been privileged to participate with numerous leadership initiatives with the United States Military Academy at West Point.

Our nation is experiencing critical times due to our violent culture and the civil unrest that recently took place in Ferguson. Violence in America may increase before it gets better, and additional civil unrest anywhere in the nation is always a possibility.

The police officer in collaboration with law-abiding citizens is pivotal to reawakening the nation. Let “Protect, Respect, Community” be the heart of their creed and also seared into the soul of each member of every community.