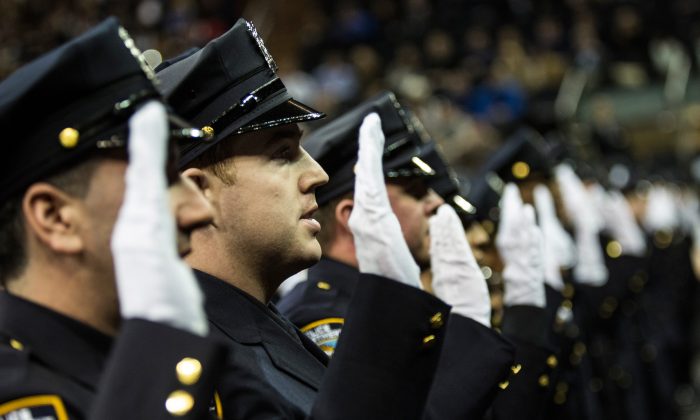 Once again America’s heart is wounded as a dedicated law enforcement official is contemptuously murdered.

The ongoing senseless killings of America’s ethical sentinels must engage our ethical compass and inspire unity among us to stop the madness.

Deputy Darren H. Goforth, a 10-year-veteran of the Harris County Sheriff’s Office, was killed while in uniform on Friday, Aug. 28.

Goforth’s life was taken in an “execution-style shooting” while he was fueling his patrol car near Houston, Texas, according to County Sheriff Ron Hickman.

Hickman referred to this killing as “senseless and cowardly” and that Goforth was targeted only “because he wore a uniform.”

Deputy Goforth leaves behind a wife and two children, ages 5 and 12.

Aside from the death of Deputy Goforth, other law enforcement heroes have also been reprehensibly murdered for wearing the uniform, including 14 ambush killings in 2014.

These included NYPD Officer Rafael Ramos, 40, and his partner, Officer Wenjian Liu, 32, both killed as they sat inside their police cruiser in Bedford-Stuyvesant, Brooklyn, on Dec. 20, 2014.

As expressed by Police Commissioner William J. Bratton at the time, “Today, two of New York’s finest were shot and killed, with no warning, no provocation. They were, quite simply, assassinated—targeted for their uniform, and for the responsibility they embraced to keep the people of this city safe.”

On the day of his death, Officer Ramos was just one hour away from graduating from a volunteer chaplain program after 10 weeks of study. He had just celebrated his 40th birthday.

Officer Wenjian Liu was a seven-year veteran of the department and was married just two months prior to being killed.

I know being a cop is dangerous but I must do it. If I don’t do it and you don’t do it, then who is going to do it?
— Officer Wenjian Liu

Once, Officer Liu told a neighbor, “I know being a cop is dangerous but I must do it. If I don’t do it and you don’t do it, then who is going to do it?”

According to preliminary data compiled by the National Law Enforcement Officers Memorial Fund, 64 law enforcement officials have already been killed in the line of duty during the first half of 2015.

Traffic-related incidents are the leading cause of officer fatalities with 30 officers killed so far this year.

Firearms-related fatalities are the second cause of death among law enforcement officials with 18 fatalities so far this year.

Vigilance must be the order of the day for all law enforcement officials. Every community member must also have eyes wide open to assist our police. America would quickly disintegrate into anarchy, chaos, and disorder, and so we must honor this profession.

The death of Deputy Goforth once again reminds us of the courage, sacrifice, and dangers facing all who protect and serve America’s communities and demands police-community collaboration.

Police–Community: A Call for Unity

As detailed in my “Principles of American Policing,” authored previously for the Epoch Times, police–community unity is indispensable to American society.

Collaboration is the only solution as “being pro-police and pro-community are inseparable, indefatigable, and pre-eminent.”

These are challenging times of violence throughout America and every community, citizen, and law enforcement official is a potential victim.

The police and community must be fully dedicated to violence prevention, community policing, and unity of effort initiatives.

The police and community must unite to take back America.

Our law enforcement officials have the sworn oath to protect and serve. Their ethical compass demands moral courage to protect the community, build trust, and uphold the Constitution and Bill of Rights.

Every citizen must also be guided by an ethical compass. Citizens also have responsibilities, duties, and obligations to society. Citizens must respect those dedicated to protect and serve and work closely with them for the common good.

These are challenging times in America that demands police–community cohesiveness.

When this unity of effort between our law enforcement and law-abiding citizens takes place, America’s commitment to reawakening the nation will be ignited.

Vincent J. Bove, CPP, is a national speaker and author on issues critical to America. Bove is a recipient of the FBI Director’s Community Leadership Award for combating crime and violence and is a former confidant of the New York Yankees. His newest book is “Listen To Their Cries.” For more information, see VincentBove.com