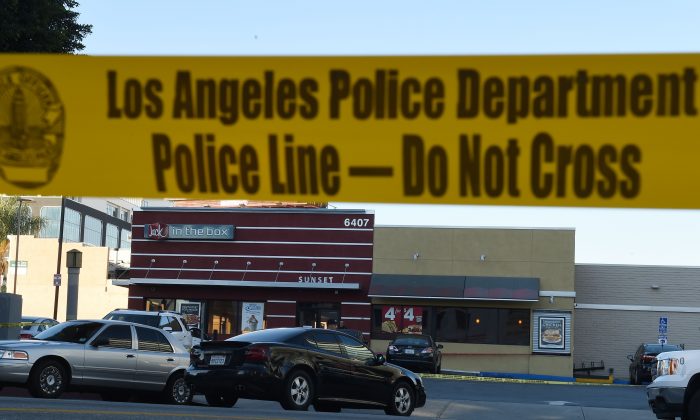 Police tape cordons off an area outside a Jack in the Box restaurant in Hollywood, California, January 31, 2017. (ROBYN BECK/AFP/Getty Images)
US

Police: Woman Pulls out Gun at Drive-Through After Being Short 1 Chicken Nugget

A woman apparently pulled a gun out in a threatening manner after she was allegedly shorted one chicken nugget in Pierce County, Washington.

The News Tribune reported that she pointed the gun at a drive-through window at two employees working at a South Hill Jack in the Box fast food restaurant.

“When the suspect vehicle pulled up to the window, they immediately had an attitude,” according to the papers.

The woman complained she didn’t get her drink quickly enough, complaining there was something in her drink.

Then, after she realized she was short one nugget, it pushed her over the edge.

“The employees returning to the window were greeted by a black handgun pointing at them,” the records show, according to the newspaper.

WSBT-TV, meanwhile, reported that she threw her drink through the drive-through window. She also left her car and started punching the window after they shut it.

Police said they tracked the woman to her home, finding her hiding in the attic, after having tackled her husband in the yard when he tried to flee.

The woman, who was not named, was charged with second-degree assault on Monday.

A search by officials resulted in the finding of a stolen 9 mm pistol loaded with 14 hollow-point rounds, the Sheriff’s Department told KOMO News. Two other people were arrested.

The woman told deputies that “none of this would have happened if the Jack in the Box people had just given them the correct order and not run their mouths,” according to the Sheriff’s Department.