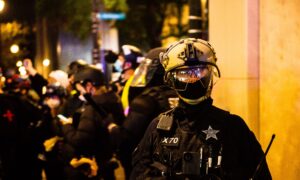 Police: Woman Kidnapped as Newborn 18 Years Ago Is Alive

A newborn girl stolen from a Florida hospital 18 years ago has been found alive — and overwhelmed — in South Carolina, where police accused the woman who raised her of kidnapping.

The sheriff said the woman’s birth family is rejoicing, but how and when to reconnect with them is up to the young woman.

She was only eight hours old when she was taken by a woman posing as a nurse from University Medical Center in 1998.