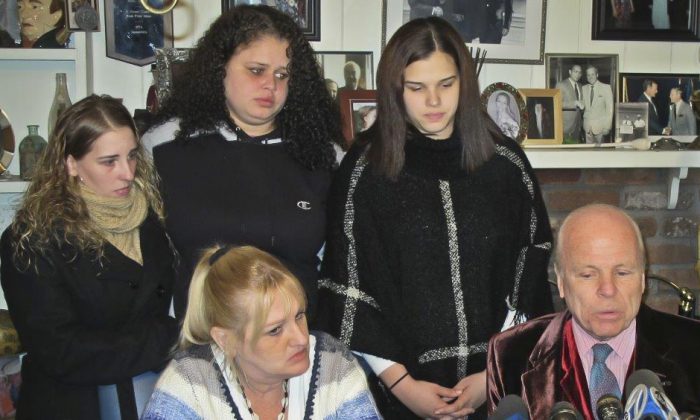 ELLENVILLE, N.Y.—The mother of a sex worker whose disappearance led to the discovery of 10 sets of human remains strewn along Long Island’s Gilgo Beach was found dead in her apartment and another daughter has been charged in the killing, the family’s attorney and police said Sunday.

The body of Mari Gilbert, 52, was found around 2:15 p.m. Saturday inside her Ellenville apartment in the Catskills, police said.

Sarra Elizabeth Gilbert, 27, was arraigned on murder and weapons possession charges, Ellenville police said in a release on Facebook.

Family attorney John Ray said a small handgun was recovered. The daughter was being held without bail at the Ulster County Jail. She was scheduled to appear in court Tuesday.

Sarra Elizabeth Gilbert suffered from serious mental disabilities and had been charged several months ago with fatally stabbing her dog, Ray said in a telephone interview. He said she had lived on and off with her mother.

Mari Gilbert’s other daughter, Shannan Gilbert, vanished in May 2010 after fleeing the home of a client in Oak Beach, New York. The search for the missing woman led to the surprise discovery of 11 sets of human remains, including hers. No one have ever been arrested in any of the killings. But investigators believe a possible serial killer — perhaps more than one — is responsible.

A K-9 officer and his cadaver dog were on a training mission searching for Gilbert in December 2010 when they happened upon what would become by spring of the following year 10 sets of human remains — eight women, a man and a toddler. The remains were found strewn along several miles of thicket adjacent to Ocean Parkway, just east of Jones Beach.

The 10 other victims, including at least four other sex workers, were found about three miles west of where officials found Gilbert’s body. Some of the other remains were found more than 10 miles away from Gilbert’s, and officials later linked some of those body parts to dismembered victims found more than 40 miles from Ocean Parkway since 1996.

Ray has challenged the findings of Suffolk County police who have insisted Shannan Gilbert’s death was accidental.