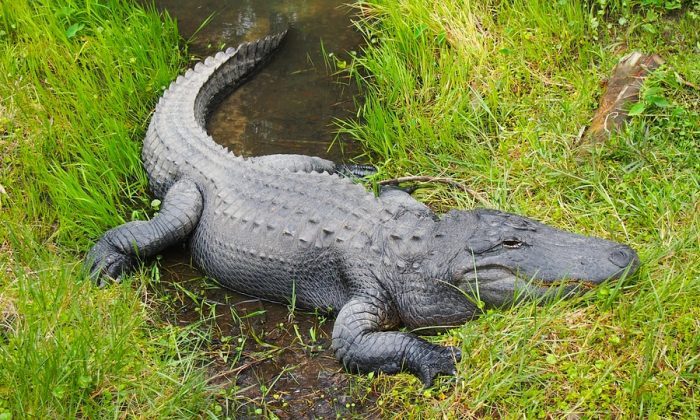 Stock image of an alligator in a park. (Jake William Heckey/Pixabay)
US News

In what appears to be a tongue-in-cheek appeal to the social conscience of drug users—and a nod to an infamous “attack squirrel”—Tennessee police warned against flushing meth down the toilet, for fear of creating “hyped up” geese and “meth-gators” downstream in neighboring Alabama.

The warning from Loretto Police Department was sparked by the arrest of a man who tried and failed to flush methamphetamine down the toilet when officers arrived at his home on July 14.

The man in question was arrested for possession for resale, drug paraphernalia, tampering with evidence, and possession, explained the police in their Facebook post.

Then came the lengthy warning.

When you send something down the sewer pipe it ends up in our retention ponds for processing before it is sent downstream.

“Ducks, geese, and other fowl frequent our treatment ponds and we shudder to think what one all hyped up on meth would do.”

Furthermore, warned the Tennessee department, if the meth should make it further downstream it could “create meth-gators in Shoal Creek and the Tennessee River down in North Alabama.”

“They’ve had enough methed-up animals the past few weeks without our help,” wrote the police department, in an apparent reference to the case of a squirrel that is alleged to have been dosed up on meth by its Alabama owner and trained to attack law enforcement.

“So, if you need to dispose of your drugs just give us a call and we will make sure they are disposed of in the proper way.”

Loretto sits just a couple of miles north of the border with Alabama in the south, where the Tennessee River winds its path a few miles from the border.

The allegedly meth-fed “attack squirrel” was found during a drug bust in Alabama last month, alongside the more usual items: methamphetamine, drug paraphernalia, and body armor.

The investigators were able to contact the Alabama Game and Fish Division of the Department of Conservation and, upon the advice of the officials, they released the squirrel into a wooded area near the drug house. The investigators said that they did not conduct a drug test on the squirrel as there was no safe way to test for meth in the animal.

A spokesman and deputy with Limestone County Sheriff’s Office, Stephen Young, said that a search warrant was issued for an apartment in the 21000 block of Piney Chapel Road in Athens, Alabama, where the investigators found the drugs, ammunition, and the squirrel, according to The News Courier.

Following a manhunt the owner, Mikey Paulk, was later charged with illegal possession of a squirrel, which cannot be legally kept as pets in Alabama, according to The Associated Press.

BREAKING: Mickey Paulk has been arrested. LCSO narcotics investigators were conducting surveillance at America’s Best Value Inn in Killen, AL when Paulk left on a stolen motorcycle. After a brief pursuit, Paulk rammed an investigator vehicle and was arrested. pic.twitter.com/3E3N0SsXU5

However, Paulk denied feeding the squirrel meth, saying he had had it since it was a baby and would never give it drugs.

Paulk faces illegal gun possession, along with other charges.