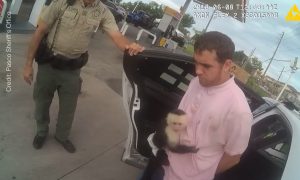 Orange County police are again reminding the public to secure their vehicles as they continue to see a rise in catalytic converter thefts.

Costa Mesa police most recently arrested two men early April 15 who they said were caught stealing a catalytic converter on the 2600 block of Newport Boulevard.

Lying underneath the body of a truck, the pair could be heard using a handheld reciprocating saw as they worked to steal the car part, police said.

The noise woke neighbors, who called police about 1:22 a.m. When police arrived, they arrested the men after a short chase.

Gerald Armstrong, 38, of Long Beach and Terrell McDaniel, 42, of Los Angeles, were arrested.

These metals are used to reduce a car’s environmental emissions, and are found in higher quantities in hybrid vehicles, since their engines are used less than a typical gas-powered car. Thus, these metals are not depleted as quickly.

The Orange County Sheriff’s Department (OCSD) told The Epoch Times in February it has seen a 650 percent increase in catalytic converter thefts throughout the past year.

There were 542 converters reported stolen to the OCSD last year, compared to 83 in 2019, department data shows.

Shortly before the latest incident, the Newport Beach Police Department released a public service announcement on Twitter about how to prevent catalytic converter thefts.

Vehicle owners can use a screwdriver or nail to engrave their car’s vehicle identification number into the catalytic converter to make it more difficult for thieves to sell, Perez said.

The second line of defense, he said, is to install a metal catalytic converter shield that will make it more difficult for crooks to steal the part.

Perez also recommends parking in a garage when possible, and setting your car alarm to activate from vibration.