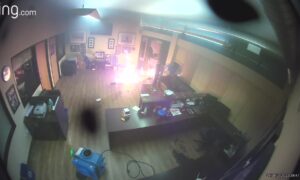 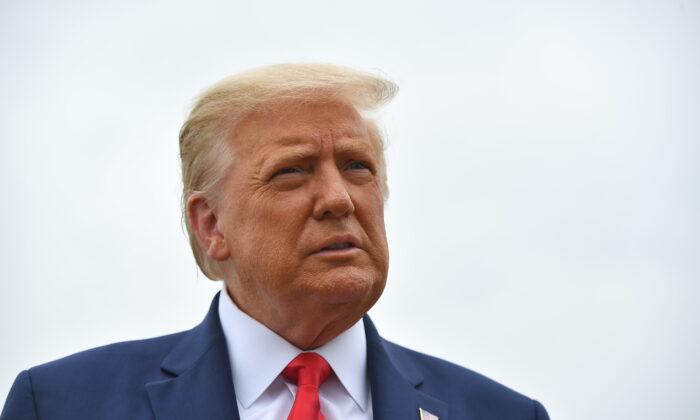 U.S. President Donald Trump speaks to the media as he makes his way to board Air Force One before departing from Andrews Air Force Base in Maryland on Sept. 1, 2020. (Mandel Ngan/AFP via Getty Images)
2020 Election

A police union that represents more than 100,000 officers has reaffirmed its endorsement of President Donald Trump in the upcoming Nov. 3 presidential election.

The International Union of Police Associations’ (IUPA) President Sam A. Cabral said Tuesday that the union was backing the president’s re-election bid as it believes there is “no other viable alternative for anyone who desires peace and security in their community.”

The IUPA previously announced (pdf) in September 2019 that it would be endorsing Trump’s re-election campaign, saying that Trump had “done more for Law Enforcement in the past two and a half years than was accomplished in the eight years that preceded his election.”

“President Trump has been a stalwart supporter of Law Enforcement since the day he took office, not just in his words, but by his actions,” Cabral said in a statement this week. “He stands in sharp contrast to his predecessor and to the candidate trying to defeat him. The differences are glaring.”

Cabral praised the president’s decision to sign an order to provide law enforcement agencies with military equipment, almost immediately upon taking office. He said the move has allowed officers to protect themselves and the public.

“This equipment saves lives,” he said. “While Democrats decry the ‘militarization’ of the police, we recognize that most of the equipment so obtained was protective gear—facemasks, gas masks, shields, and even mundane office equipment.”

Cabral said that if elected in November, Democratic presidential nominee Joe Biden will end that program and “hamper our ability to protect our communities.”

The IUPA president in his statement criticized Biden’s Aug. 30 condemnation of the violence and looting that has taken hold of many U.S. cities since the police-custody death of George Floyd in May.

Biden on Monday in a statement on his campaign website condemned the violence in Portland, Oregon—a day after right-wing protester Aaron Danielson was shot dead in the street. Cabral dismissed it as a political move.

“Violent rioters have sabotaged protests across the nation. We have watched as businesses were looted and burnt to the ground, many never to re-build. Public buildings and monuments have been defaced and destroyed,” Cabral said. “Officers have been injured by bricks, chunks of concrete, explosive devices, frozen water bottles, and eye damaging lasers. There have been several murders.”

“During all of this upheaval and destruction, there has been silence from the Democrats. None have stepped forward to condemn the anarchy, riotous behavior, and arson. Joe Biden has even referred to the police as ‘the enemy,’” he continued.

Biden condemned the violence “after months of devastation throughout many major cities,” Cabral said, suggesting that this alone shows that he is not fit to be president.

“This condemnation was not made due to a moral imperative or a vision of a better America, but rather because polling indicated it was a concern of the American voter,” Cabral added. “If anyone needs a poll to tell them that rioting, looting, arson, property destruction, and murder are wrong, then they are morally bankrupt and not fit to be the president of the local fraternal organization, let alone the leader of this great nation.”

Trump has openly condemned the violence incited in U.S. cities since they first began, and has repeatedly accused the media and Democrats of attempting to portray rioters as peaceful protesters.

The Epoch Times has reached out to Biden’s campaign for comment.

The IUPA was chartered in 1979 and now serves members across the United States, Puerto Rico, and the U.S. Virgin Islands. Its mission is to protect and advance officers’ wages, benefits, and work conditions.