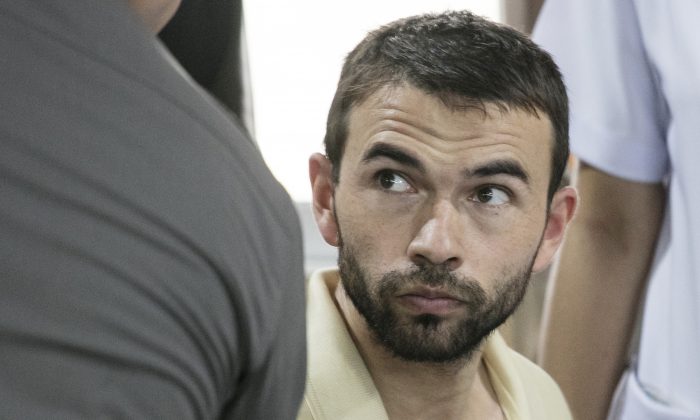 The man who was arrested at an apartment on Saturday, Aug. 29, 2015, and found with evidence police said included bomb making equipment and stacks of passports is seated after being brought to police headquarters in Bangkok, Thailand. (AP Photo/Wason Wanichakorn)
Asia & Pacific

Police: Suspect in Custody Unlikely to Be Bangkok Bomber

BANGKOK—A foreign suspect arrested at the border near Cambodia is unlikely to be the yellow-shirted man seen in security videos and suspected of planting a deadly bomb at a Bangkok shrine, but is definitely a conspirator, police said Friday.

The apparent ruling out of the suspect — identified as Mieraili Yusufu or Yusufu Meerailee — as the main perpetrator suggests that the person who bombed the Erawan Shrine in Bangkok on Aug. 17 could still be at large despite two arrests and the naming of seven other suspects in recent days.

The evening blast at the shrine popular among Thais and tourists alike left 20 people dead and more than 120 injured in one of the most devastating acts of violence in Bangkok in decades.

Thai authorities have suggested that at least two of the suspects are possibly Turkish, boosting a theory that the bombing was to avenge Thailand’s forced repatriation of more than 100 ethnic Uighurs to China in July. Uighurs (pronounced WEE-gurs) are related to Turks, and Turkey is home to a large Uighur community.

National police spokesman Prawut Thavornsiri said DNA samples taken from the suspect did not match the DNA found on evidence that the bomber is believed to have left behind — in a taxi, on banknotes, and on a motorcycle taxi he took on the night of the attack. The bomber is believed to have left the pipe bomb in a knapsack at the open-air the shrine when it was packed with worshippers during evening rush hour.

“Now we don’t have any evidence to say that he is the yellow-shirted man,” Prawut told reporters.

“However, he is definitely involved with the bombing,” Prawut said about the suspect, who was arrested Tuesday at the border with Cambodia.

The suspect’s DNA or fingerprints were found in two apartments that were raided by police last weekend on the outskirts of Bangkok, Prawut said. Police say both apartments contained bomb-making materials, and one had more than 200 fake Turkish passports.

“He was staying at both places,” Prawut said. “This means that the man is involved in bomb-stocking places.”

Another suspect, who was arrested at one of the apartments on Saturday and placed in military custody, was taken Friday to Bangkok police headquarters. Armed soldiers wearing body armor escorted the man, who possessed a fake Turkish passport when he was arrested. Police have also identified seven other suspects for whom arrests warrants have been issued.

Earlier Friday, Thai authorities unveiled the repaired statue at the center of Erawan Shrine which was damaged in the blast.

The swiftness with which the shrine has been repaired and reopened to the public was the latest attempt to boost confidence among Bangkok’s tourism and business communities.

Authorities have also intentionally avoided calling the bombing an act of terrorism for fear of hurting Thailand’s reputation.

“The most important issue for the country’s image is to restore confidence about safety,” Minister of Culture Vira Rojpojchanarat told reporters at the shrine. He said the repairs were intended to “create confidence and raise the morale of (Thai) people and tourists.”

The ministry’s Fine Arts Department repaired 12 areas of the gleaming golden statue of the Hindu god Brahma that were damaged by the attack, notably on its four-headed face where a chin was blasted out, Vira said.

The Erawan Shrine is especially popular with Chinese tourists, feeding the speculation that it could have been targeted by people who believe the Uighurs are oppressed by China’s government.

China has alleged that the Uighurs repatriated by Thailand included some who intended to join Islamic State fighters in Syria. Thailand is believed to be a transit stop for Chinese Uighurs attempting to go to Turkey.

In another finding that could support a link to Uighurs, police said that Yusufu, the suspect cleared of being the bomber, was carrying a Chinese passport. The passport indicated he was from the western Chinese region of Xinjiang, but Thai authorities had not yet verified its authenticity, Prawut said. Xinjiang is the home of the Turkish-speaking Uighurs.

The other suspects include a Thai woman identified as Wanna Suansan and said to be married to a Turkish man. Both are being sought by Thai police.

On Thursday, the Turkish Embassy in Bangkok issued a statement saying it has not received confirmation from Thai authorities about the suspects’ nationalities. Thai authorities responded to the complaint by saying they will submit the seized passports, both Turkish and Chinese, to the relevant embassies once forensics tests have been completed.

Thai authorities have been careful not to state publicly that the case may be linked to the Uighurs. They have said that such speculation could affect international relations and hurt tourism.

Thai security officials have suggested the suspects are part of a human trafficking ring with a grudge against Thailand. However, Thai Prime Minister Prayuth Chan-ocha, known for his outspokenness, has acknowledged it could have been a gang involved in smuggling Uighurs out of China.