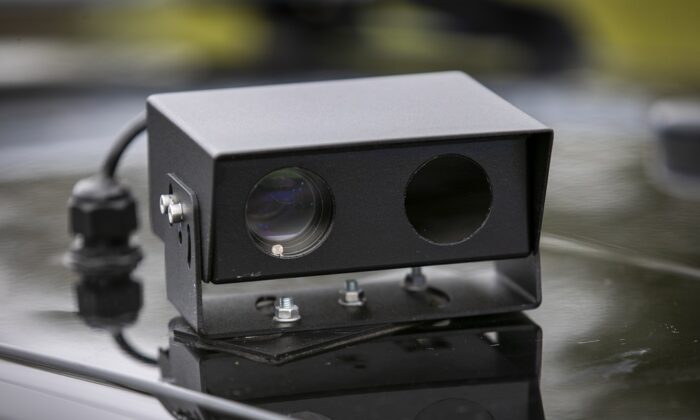 An Automatic Number Plate Recognition (ANPR) camera on show during a press launch by the Police Service of Northern Ireland in Lisburn on Sep. 8, 2020. (PA)
UK

The privacy campaigning organisation Open Rights Group has teamed up with a Green Party politician to challenge measures that would allow police to put under surveillance tens of thousands of motorists driving around London every day.

The steps were taken without public consultation by the Mayor of London, Sadiq Khan.

In September 2021 ANPR cameras were crucial in tracing a Nissan Micra car belonging to the killer of Sabina Nessa, who was murdered in a park in Kidbrooke, southeast London.

But the Open Rights Group said that in May this year, Khan—who was reelected for a second term in May 2021—expanded the scope of this data-sharing to include the colour and make of vehicles, images of drivers, and even pedestrians.

Sian Berry, a Green Party member of the London Assembly, said in a statement to The Epoch Times: “I have been telling the mayor since 2019 that sharing this data with the police is wrong and that Londoners must have their say in any decision. With so many awful revelations bringing trust and confidence in our police to an all-time low, Londoners should have been asked if they would trust them with this massive database about their daily movements.”

The Open Rights Group said plans to expand the Ultra Low Emission Zone—which is monitored by ANPR cameras—to the whole of Greater London from the end of 2023 would mean every single car and driver in the city would be subjected to surveillance by the Metropolitan Police.

The Executive Director of the Open Rights Group, Jim Killock, said in the same statement: “With a stroke of a pen, Sadiq Khan has taken a decision that violates the basic privacy rights of millions of Londoners. As a former human rights lawyer, Sadiq Khan should know that his decision to grant access to the Metropolitan Police is unlawful without meaningful public consultation.”

The Open Rights Group and Berry have written to Khan urging him to rethink the move and threatening to challenge his decision in the courts.

The Independent Advisory Group on ANPR has described the move as a “gargantuan increase of surveillance in London” and now the Open Rights Group is hoping to challenge the legality of the move.

Berry said, “The expanded Ultra Low Emission Zone has been helping cut air pollution for many months already, without all this data being shared with police, and the mayor must now reverse his hasty decision and instead protect Londoners’ privacy.”

Salima Budhani, of the law firm Bindmans, said in the statement: “The aim of this case is to require the mayor of London to consult with Londoners about the proposed sharing of location records and images from TfL’s ANPR cameras with the Metropolitan Police … The mayor was under a clear duty to provide information and seek views before signing off the scheme. Had he done so our clients and others would have had an opportunity to air their concerns about the privacy risks involved.”

A spokesperson for the mayor of London said in an emailed statement: “Modern technology has a vital role to play in protecting Londoners and tackling serious crime. The use of traffic cameras for ANPR has been in place since 2015 after being introduced by the previous mayor. We are considering the letter and will respond in due course.”