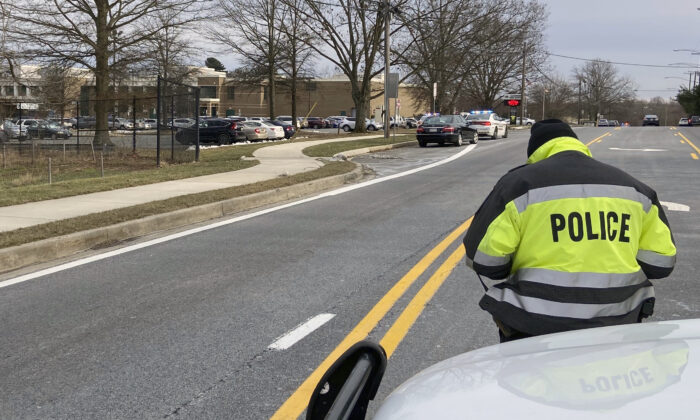 A policeman stands near the scene at Col. Zadok Magruder High School where authorities say a student was shot and a suspect was in custody, in Rockville, Md., on Jan. 21, 2022. (Freddy Kunkle/The Washington Post via AP)
Crime and Incidents

ROCKVILLE, Md.—A student was shot at a Maryland high school Friday afternoon, prompting an hourslong lockdown, authorities said. A suspect was in custody.

A male student was shot on campus at Magruder High School in Rockville, Montgomery County police said in a tweet. School officials said in the late afternoon that the school had been deemed safe by authorities and dismissal would begin. Earlier, television footage had shown numerous squad cars on the scene and officers entering the building.

The injured student was taken to a hospital, police said. A letter to parents from the school principal said the wounded student was in serious condition.

The letter said students who had been locked down in the school would be dismissed starting between 5 and 6 p.m., hours after the lockdown began.

“Our goal is to facilitate students’ exiting the building as quickly as possible, but we ask families to be patient as we coordinate with our police partners who remain onsite,” the letter said.