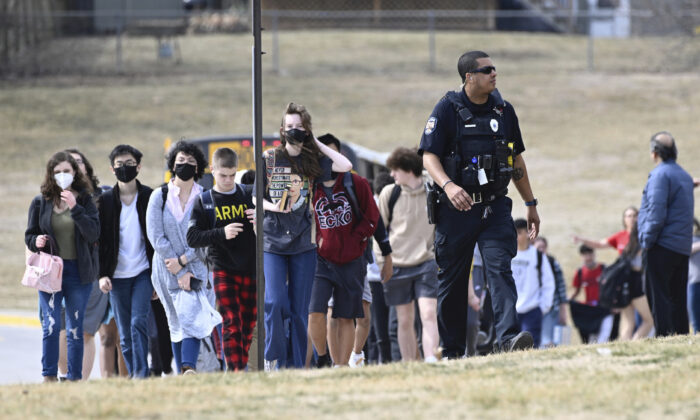 Students from Olathe East High school are led off busses to reunite with their parents, at Pioneer Trail Middle School in Olathe, Kan., on March 4, 2022. (Reed Hoffmann/The Kansas City Star via AP)
US News

OLATHE, Kan.—A student shot and wounded an administrator and a school resource officer Friday at a suburban Kansas City high school, and the student also was wounded when the officer returned fire, authorities said.

The male student at Olathe East High School was taken into custody, Olathe police Sgt. Joel Yeldell said, and all three are expected to survive. No other students were injured, he said. Police have not identified the suspect.

Yeldell said the school resource officer notified dispatch over the radio just after 10:30 a.m. that he and an administrator had been shot and wounded by a student in the office. The resource officer said he returned fire, according to Yeldell, shooting and wounding the student.

“I’ve been shot,” the resource officer told dispatchers on radio traffic captured by Broadcastify.com. The officer then said he had applied a tourniquet to himself and that the suspect’s firearm had been secured, The Kansas City Star reported.

The dispatcher responded: “We got a lot of help headed that way.”

Yeldell did not provide additional information on what prompted the shooting.

“The good news is that no students were injured,” Yeldell said at a news conference. “We have an SRO it sounds like that did his job so that’s great news and the injuries are expected to be survivable.”

Yeldell said the student is an adult. The county prosecutor’s office declined to comment Friday on potential charges.

Overland Park Regional Medical Center said in a statement that one of the three people wounded is in critical condition. The other two have been discharged. The statement said the families are requesting privacy.

Susan Burgett told The Associated Press she was panicked when she heard about a shooting at the school of her 16-year-old daughter, Emerson Burgett. Her daughter texted immediately to tell her she was safe.

“The first thought was to panic and imagine that there is a shooter in the hallway and kids screaming but that wasn’t what happened thank God,” she said while waiting to be reunited with her at the staging site. “That is just what we are used to seeing. There are so many shootings all the time that it is such a sad reality that this is what we have to live with.”

She said her husband was concerned their daughter would have a panic attack but she didn’t think that would happen because “the kids just expect this. They hear about it all the time.”

“It’s terrifying but at the same time I want to see my child. That is the main thing.”

Agents with the Bureau of Alcohol, Tobacco, Firearms and Explosives were on the scene to help with the investigation. No information was immediately available on the type of firearm used, said John Ham, a spokesman for the ATF in Kansas City. He added that police would release those details when they are available.

Olathe Public Schools said in a tweet that Olathe East High School, which has an enrollment of 1,900, was put on lockdown after the shooting.

“Please know that law enforcement is on site and the building is secured,” the district said.

Police asked parents and the public to stay away from the school and had them pick up their children elsewhere. The district also said it was making counselors available.