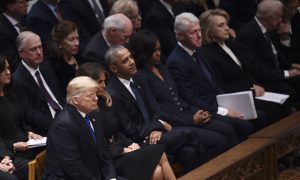 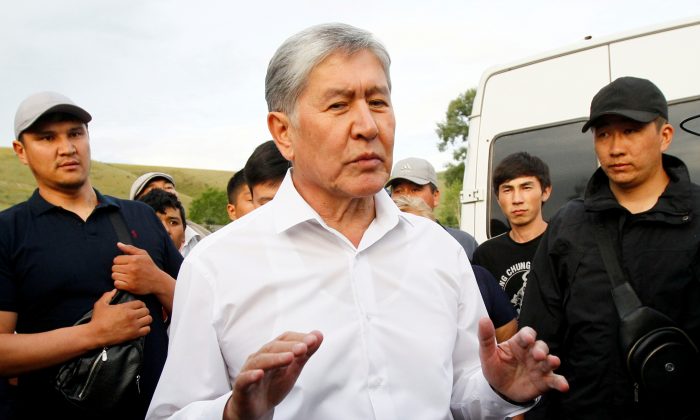 Kyrgyz former President Almazbek Atambayev, who was stripped of legal immunity after a parliamentary vote, and his supporters attend a meeting with journalists in the village of Koy-Tash near Bishkek, Kyrgyzstan on June 27, 2019. (Vladimir Pirogov/File Photo via Reuters)
Asia & Pacific

MOSCOW—Gunfire was heard outside the residence of the former president of Kyrgyzstan as police moved in to try to arrest him.

Kyrgyzstan’s Health Ministry says a serviceman died during an operation to arrest the country’s ex-president on Aug. 7.

In a statement reported by the Central Asian country’s official news agency, the ministry said the special forces member had been shot.

The ministry said early Thursday that 35 other people have been injured.

Special forces moved in to arrest former president Almazbek Atambayev on corruption charges at his residence south of the Kyrgyz capital.

Warning: Video may be disturbing to some readers.

DEVELOPING STORY: Kyrgyz special forces have stormed the compound of former President Almazbek Atambaev, who has been refusing to to obey a subpoena in an unspecified criminal investigation. pic.twitter.com/vF60JcYNjZ

The Central Asian nation’s parliament in June rescinded the autonomy that Almazbek Atambayev was accorded as former president of the country.

Atambayev, 62, has taken part in two violent revolts which overthrew his predecessors in 2005 and 2010.

He is accused of a range of crimes including corruption and expropriation of property.

Atambayev, who was in office from 2011 to 2017, says the charges have been concocted by President Soorobai Jeenbekov.

Jeenbekov, who came to power in 2017 with Atambayev’s support and used to be his close ally, sidelined his predecessor in 2018 by reshuffling senior security officials and wresting control over the ruling party out of Atambayev’s hands.

An escalation of the conflict between the two could be of concern to Russia which has a military airbase in the former Soviet republic and counts it among its closest political allies.