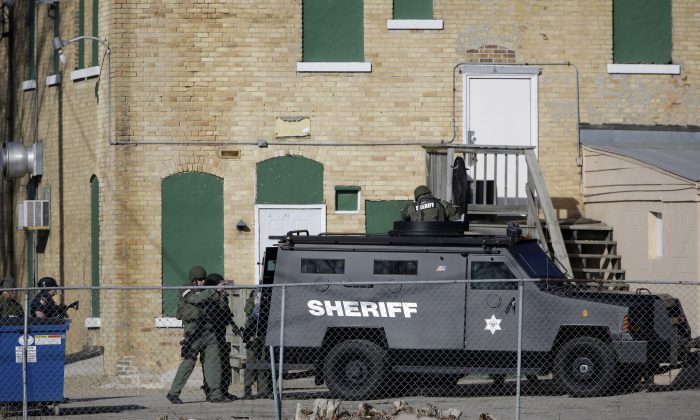 Officers from various municipalities are positioned near the site of a shooting at a motorcycle shop in Neenah, Wis., Saturday, Dec. 5, 2015. (Ron Page/The Post-Crescent via AP) NO SALES; MANDATORY CREDIT
US

NEENAH, Wis.  — A standoff at a motorcycle shop in Wisconsin ended Saturday with one person dead, a police officer injured and one person in custody, authorities said.

Police said shots were reported at Eagle Nation Cycles on Neenah’s Main Street shortly before 9 a.m. Saturday, along with a report that hostages had been taken. Police responded and nearby homes and businesses in Neenah, about 85 miles northwest of Milwaukee, were evacuated.


Chief Kevin Wilkinson said at a briefing Saturday evening that during the hourslong standoff, a male came out of the building holding a weapon and did not comply with police instructions to drop it. He said the person was shot at by officers, but also may have been shot at from inside the building. That person was taken to a hospital and later died, police said.

“We’re saddened by the loss of life in our community,” Wilkinson said.

Authorities are not releasing his name or the name of the officer who was hurt. Wilkinson said the officer was shot at but his helmet deflected the bullet. The injured officer was treated and released from Theda Clark Medical Center in Neenah, hospital spokeswoman Megan Mulholland said.

Wilkinson said negotiations continued over several hours, and a person was taken into custody around 1 p.m. Police are not releasing a name. Wilkinson said authorities were still uncertain what spurred the initial confrontation, or exactly how many hostages had been inside. He estimated between three and 10.

The Wisconsin Department of Justice’s Division of Criminal Investigation will handle the investigation of the shooting.

Martin Siebenaler, an acting public information officer with the U.S. Bureau of Alcohol, Tobacco, Firearms and Explosives in St. Paul, Minnesota, said local police are taking the lead on the investigation but federal agents will assist with tracing the firearm.