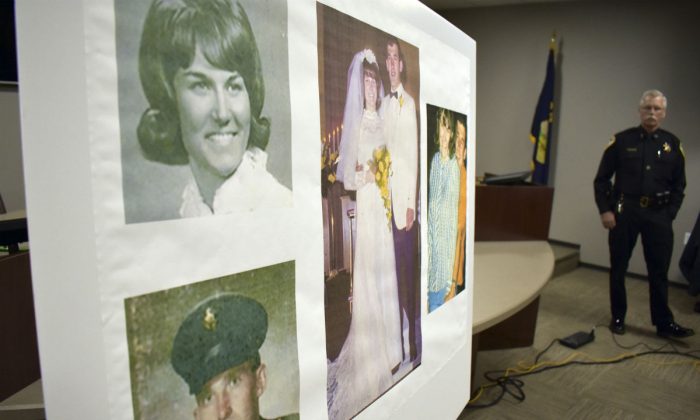 Photos of Linda and Clifford Bernhardt, who were killed in 1973, are displayed at a press conference at the Yellowstone County administrative offices in Billings, Montana on Monday, March 25, 2019. Yellowstone County Sheriff Mike Linder, pictured at right, says authorities have identified the couple's now-deceased killer. (AP Photo/Matthew Brown)
Crime and Incidents

In 1973, a young couple was found dead in their home in Montana. Police investigated painstakingly for years, conducting hundreds of interviews, They even brought in a psychic to help but to no avail.

Now over four decades later, police have finally made a breakthrough, announcing on March 25 that they have identified a suspect for the murder of Linda and Clifford Bernhardt, who were both 24 at the time of their deaths.

“Today we can tell you that based on the evidence collected on the scene, which includes biological evidence and all the reasonable inferences taken from this evidence, we have determined that Cecil Stan Caldwell, a former coworker of Linda Bernhardt at Ryan’s Inc. is the person responsible for the deaths of Linda and Clifford Bernhardt,” Yellowstone County Sheriff Mike Linder said during a press conference on March 25.

Caldwell worked at the City of Billings Street Traffic Department and was a part-time driver for U.S. mail contractor Dallas Parkins. He died in 2003 at the age of 59, according to his obituary in the Billings Gazette. He did not have a criminal record.

Authorities said that Caldwell’s name was in the investigative file but could not confirm whether he had been interviewed.

The suspect, Cecil Stan Caldwell, died in 2003, Linder said. He was a coworker of Linda Bernhardt, Linder said. https://t.co/UjdFFdOXui

Police also did not reveal a motive for the killings but speculated that Linda was probably the target, according to the press conference.

Linder said all the leads had dried up by 2004 when DNA was discovered on evidence gathered at the crime scene. A comparison between the DNA with an FBI database of known criminals yielded no results.

In 2012, a cold case unit was formed and the investigation of the Bernhardt murders was made a priority, the sheriff said.

Then in 2015, the sheriff’s cold case unit enlisted a Virginian technology company, Parabon NanoLabs, to analyze the DNA by comparing it to genetic samples available through a public genealogy database.

Cecil Stan Caldwell’s name was in the Bernhardt investigative file but he was likely never interviewed, detectives said.

For Vince Wallis, a former detective captain with the sheriff’s office, this helped narrow the list of suspects to Caldwell and his brother. They cleared 80 male suspects across 12 states as possible suspects using DNA evidence, authorities said.

Wallis said after comparing the sample with DNA obtained voluntarily from the brother, it was analyzed by the Montana State Crime Lab to eliminate him as a suspect. That left only Caldwell on the list.

Clifford Bernhardt was a concrete worker and Vietnam veteran, while his wife worked at a grocery distribution warehouse. The couple had been married several years and had just moved into the house weeks before they were murdered. Their bodies were discovered by Linda’s mother who went to their residence when her daughter did not turn up to work.

Here is a composite profile of the suspect Cecil Caldwell from DNA. Second photo is a yearbook photo of the suspect in the double murder of Linda and Clifford Bernhardt. pic.twitter.com/CEoievfLYT

Media reports at the time described the homicides as “the most sensational unsolved murder case in Billings history.” They detailed how Linda had been bound and sexually assaulted before her death. Authorities reportedly employed psychologists to try to build a profile of the suspect.

Police also enlisted the help of “The Amazing Kreskin” when the mentalist visited town, according to a 1980 news report.

Family members of the victims, who were in attendance at the press conference, issued a statement thanking the sheriff’s office for its work but made no further comment and asked for privacy.