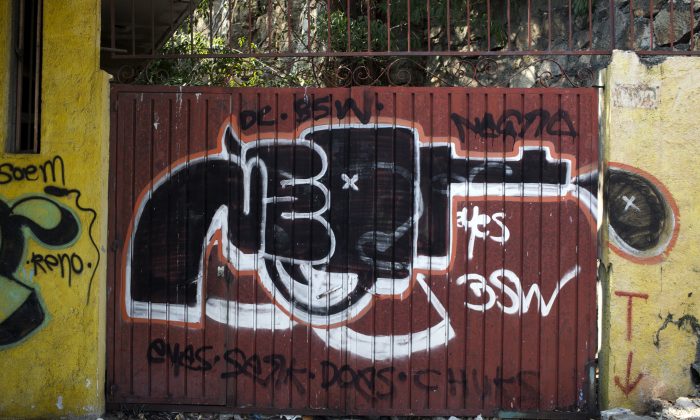 The gate of the once popular restaurant "Los Braseros" is emblazoned with a graffiti drawing of a gun, situated on the seaside boulevard, known as " La Costera," that runs through the hotel zone in Acapulco, Mexico, on May 10, 2016. Mexico has lined the cityís coastal boulevard with heavily armed police and soldiers, turning Acapulco into a high-profile test case for a security strategy that the government has used elsewhere: When homicides spike, flood the area with troops. (AP Photo/Enric Marti)
Americas

ACAPULCO, Mexico—Along with beach towels or sandals, there’s a new popular beach accessory that says a lot about the violence gripping this once-glamorous resort: a small black leather tote hanging from the neck or shoulders of some men. It’s not a man-bag, exactly; it holds a small pistol.

“When I saw you guys standing outside my office, I almost went for my bag,” said one businessman who lives in terror after getting death threats and extortion demands by criminal gangs at his office four blocks from the water. “I’m in fear for my life.”

Death can strike anywhere in Acapulco these days: A sarong vendor was slain on the beach in January by a gunman who escaped on a Jet Ski. Another man was gunned down while enjoying a beer at a seaside restaurant. In the hillside slums that ring the city, a 15-year-old girl’s body was found chopped into pieces and wrapped in a blanket, her severed head in a bucket nearby with a hand-lettered sign from a drug gang.

The upsurge in killings has made Acapulco one of Mexico’s most violent places, scaring away what international tourism remained and recently prompting the U.S. government to bar its employees from traveling here for any reason.

In response, Mexico has lined the city’s coastal boulevard with heavily armed police and soldiers, turning Acapulco into a high-profile test case for a security strategy that the government has used elsewhere: When homicides spike, flood the area with troops.

Today it’s almost easier to find a truck full of soldiers, a federal policeman or a gaggle of local tourist cops than it is to find a taxi along the “costera,” the seaside boulevard that runs through the hotel zone. Marines patrol the beach, while federal police watch over the breakwaters.

“This area has been made bulletproof,” Guerrero state prosecutor Xavier Olea said.

Except it hasn’t. A week after AP reporters visited, gunmen shot to death three young men in broad daylight two blocks away from the restaurant; two of their bullet-ridden bodies lay on the concrete just off the beach, and one bled out on the sand. Two were waiters, and the third a roving coconut oil vendor.

On a recent day, farther down the beach, another black bag hung around the neck of a man nicknamed “the lieutenant.” He works as a bodyguard for a man with underworld connections who agreed to meet near an open-air restaurant to discuss the security situation. He spoke on condition of anonymity to avoid being targeted by rivals or authorities.

“There are 300 paid killers on the costera,” the underworld figure said, gesturing expansively over plates of fried fish and shrimp. At least one other bodyguard was nearby. “A decent killer makes about 5,000 pesos ($275) a week.”

Experts say Acapulco shows the limitations of the government’s security strategy. Federal police, almost none of whom are from the city, quickly get lost once they leave the coastal boulevard and ascend into twisting, hillside neighborhoods. Their heavy weapons are ill-suited to urban policing, and they’re hampered as well by Mexico’s unwieldy judicial system and a lack of investigative training.

Last week two men were shot and wounded on the street a block from the popular Caleta beach. Police showed up, but when no ambulance arrived, relatives or friends simply bundled the men into private vehicles to take them to the hospital. Police marked spent shell casings with cut-off plastic soda bottles, but there was no sign of any in-depth investigation.

“It’s the same problem in Guerrero, the same problem in Tamaulipas, in Michoacan,” security analyst Alejandro Hope said, referring to three states where homicides have spiked. “Suddenly there’s an emergency, they send troops to where the problem is and in the short term crime drops. But then there is an emergency somewhere else, and then the troops have to leave, and they have not developed local law-enforcement capacity.”

Acapulco’s latest wave of killings began April 24, when bursts of gunfire broke out along the coastal boulevard. It was the first time such sustained shooting had been seen there since the darkest days of 2012, when the murder rate in this city of 800,000 hit 146 per 100,000 inhabitants. It has since fallen to about 112 per 100,000, but that remains far higher than nationwide levels and appears to be on the rise again.

Both prosecutor Olea and the underworld figure agree the conflict started late last year between the Beltran Leyva gang, which used to control the city, and the Independent Cartel of Acapulco, or CIDA, which arose following the death of cartel boss Arturo Beltran Leyva in 2009.

The Beltran Leyva family, now supported by Mexico’s fastest-rising cartel, the Jalisco New Generation gang, tried to reassert control in November, calling themselves “La Empresa,” or “The Company,” and employing a small group of professional killers known as the Russians.

The Beltran Leyvas quickly antagonized the CIDA by cutting pay in half for enforcers and dealers, resulting in an open war. It is suspected that the waiters and the coconut oil vendor killed last week were innocents with no drug connections, allegedly slain by the Russians just to bring heat on the local gang.

Street-level drug dealing may well be second only to Acapulco’s much-diminished tourism industry for the amount of money involved. A so-called Oxxo—local slang for a drug retail house, borrowed from the name of a ubiquitous convenience store chain—can do an estimated 150,000 pesos ($8,100) in business in a single night. The underworld figure said there are about 50 such “stores” in Acapulco, meaning that drug sales probably amount to about 7.5 million pesos ($400,000) per day.

That pays for a lot of hitmen.

The April 24 shootout came just after mysterious text messages circulated among city residents warning of a bloody weekend, prompting many to stay off the streets and keep their kids home from school.

State authorities initially described it as a direct attack on police installations, but as more information emerged it seems to have resulted from an attempt by unknown attackers to rob a drug gang payroll of about 50 bundles of cash, each containing thousands of pesos.

After the first shots were heard on the coastal boulevard, federal police in their underwear began firing from a nearby hotel where they were staying. Farther down the road, another hotel had its facade sprayed with bullets.

The police reaction, captured in online videos of loud, staccato gunfire, worsened the public perception of violence in Acapulco. About 1,600 businesses in the city have already closed due to security problems, said business chamber leader Alejandro Martinez.

“There is a lot of mystery about what happened (in the shootout), but whatever they did, they did it badly,” Martinez said of security forces. “That was an error on the part of the federal government that cost us a lot.”

He added that the drop-off in tourism has hit business owners already dealing with extortion demands from the gangs.

“First they send text messages,” Martinez said. “Then come the phone calls, and if you don’t pay, they come to your business, four or five men, asking for the owner.”

There have been targeted killings of business owners, and also collateral damage: One waiter at a downtown restaurant was killed by a stray bullet during a gun battle.

Joaquin Badillo, who runs Acapulco’s leading private security firm, estimated that 95 percent of the killings in the city are linked directly or indirectly to criminal gangs.

But that’s little comfort to residents of Acapulco’s slums, who still suffer the worst of the violence despite the high-profile tourist-quarter killings.

New police chief Max Saldana said he thinks the gangs “have retreated up into the ‘colonias,'” or slums, where few tourist dollars ever arrive.

In one, Ciudad Renacimiento, soldiers in battle gear guarded the chained gates of the Gabriela Mistral grade school on a recent day as mothers waited outside to pick up their kids. Like many schools in Acapulco, security was stepped up after gang members demanded teachers hand over year-end bonuses or a cut of their paychecks.

A few steps away, Pedro Ramirez, 71, sat at the street stall where he sells kitchenware. Gesturing toward the soldiers, he said all is quiet during the day but the danger begins as soon as they leave.

“It’s like there is a curfew, nobody goes out at night anymore,” said Ramirez, who has lived in the slum since its beginnings in 1980. “In the morning, dead people turn up on streets.”