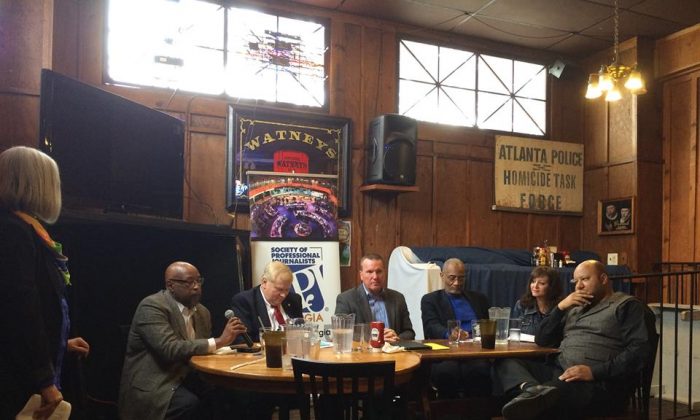 Police Shootings and the Media: ‘Don’t believe your lying eyes’

Two police chiefs, two journalists, an elected official, two activists, a mental health advocate, a lawyer, and a professor walk into a bar. They talk in a thoughtful, civil way about police shootings, protests, and what the media gets wrong about that story. It was the Society of Professional Journalists—Georgia’s Police, the Media and the Public at Manuel’s Tavern in Atlanta on Oct. 31, 2015. I’m an officer on its board of directors. The police shootings program was my professional education passion project.

Akinyela cited the 2012 Malcolm X Grassroots Movement report. It said a vigilante, an officer, or a security guard kills a person of color every 28 hours. According to Akinyela, it is common that “an officer has killed with impunity and nothing has happened.” Grogan listened respectfully and said, “I would have to disagree with that.” He said most of the millions of encounters between police and citizens are not violent. “Are there cases where police officers use force and they should not have? Yes, of course”—but police chiefs and the judicial system address the problem, in his opinion.

Are there cases where police officers use force and they should not have? Yes, of course.
— Billy Grogan, police chief, Dunwoody, Georgia

The talk was vivid. As moderator, I got things started and kept them on schedule, gripping my page of questions as a security blanket. Soon the panelists began to ask each other questions, passing the microphone back and forth.

Suber spoke of his early years in a broadcast newsroom, and how often the police radio and then the news stories would cite “three black guys” as perpetrators of mayhem. It became a joke among the reporters. Gesturing to himself, he asked what would be an accurate description? Is he a black guy? Is he one of the dreaded three black guys? Or would it be better to say a man with a bald head and a herringbone jacket?

More than anything else, the media must look deeper for context, said Suber. We parachute into a situation and report in 35 seconds. That is never the true story. “Don’t believe your lying eyes.”

The panelists wrangled about descriptions of suspects and the right way to inform people about suspects. When do descriptions help the public and the police and when they do they hurt public perceptions of “three black guys”?

Speaking of the death of Anthony Hill, Yandura said it was important to remember that an unarmed suspect can take an officer’s gun and shoot the officer.

DeKalb County Police Officer Robert Olsen shot and killed Hill in Chamblee, Georgia, on March 9, 2015. Hill was an Air Force veteran, a musician, and 27 years old. Hill was incoherent, naked, and unarmed, and had a history of bipolar disorder. Panel members discussed how far he was from the officer when he was killed. No charges were filed against Olsen, but a grand jury recommended further investigation.

Chidi asked the chiefs if police officers feel under attack, when the media keeps running stories of bad actions and fatal encounters. Yes, they do, according to Grogan. Yandura nodded, with a somber expression.

The program was made possible by a grant from the National Society of Professional Journalists.