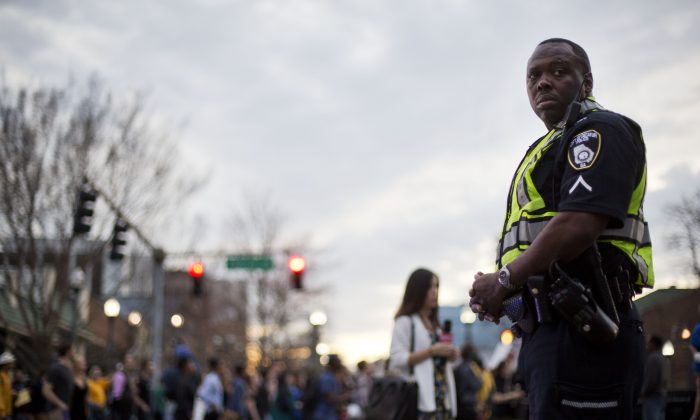 A police officer stands guard during a protest against the shooting death of Anthony Hill by police, Wednesday, March 11, 2015, in Decatur, Ga. (AP Photo/David Goldman)
US

Another police shooting leading to the death of a black man has provoked concern and anger among activists calling for police reform since the shooting death of Michael Brown in Ferguson, Missouri.

Tuesday afternoon, officers from the Cobb County, Georgia, and city of Smyrna, Georgia, police departments arrived at a local Goodyear Tire shop to serve an arrest warrant for probation violation, according to a report by local television station WSB-TV.

Police said the suspect, who worked at the tire shop, tried to flee when he saw the officers approaching.

The man jumped into a nearby car and drove toward the police, leading officers to fear for their lives and shoot, police said.

Although police have yet to identify the man who was killed as of Wednesday afternoon, a woman who spoke to WSB-TV identified herself as the mother of the 25-year-old shooting victim, Nicholas Thomas.

The mother, Felicia Thomas, told WSB-TV that her son was on probation for traffic violations. She said it was unnecessary for police to shoot and called on the FBI to investigate the shooting.

Local newspaper The Atlanta Journal-Constitution uncovered court documents that revealed Thomas was on probation for driving his car at a Kennesaw State University police officer in March 2013, when the officer tried to stop him for speeding. Thomas was charged with aggravated assault, attempting to elude police, and driving with a suspended license, an improper license plate, and no proof of insurance. He spent 56 days in jail and was serving the rest of his seven-year sentence on probation, according to the newspaper report.

On Wednesday, activists who have called for police reform since the Ferguson shooting expressed incredulity with the police’s version of the incident, pointing to video footage from the scene that showed bullet holes in the car’s passenger windows, but not in the windshield.

DeRay McKesson, an activist who has made frequent media appearances to speak about protests in Ferguson, posted on his Twitter account:

Again, they say #NicholasThomas was driving towards them. Then why are there no bullets in the windshield? pic.twitter.com/Ui9RyHSowG

Brittany Eustache, a Goodyear customer who was an eyewitness to the shooting also told WSB-TV a different account. She said the officers began firing immediately after Thomas got into the car.

“The car was not moving when they began to shoot at him. The car had been stopped. He hit a curb. He couldn’t go any further,” she said.

Police are still determining how many of the officers opened fire Tuesday.

The practice of shooting at suspect vehicles has been abolished in recent years by police departments, due to safety concerns for both officers and civilians.

In New York City and Philadelphia, for example, department policies explicitly prohibit officers from discharging their weapons at or from a vehicle, unless the suspect is shooting at the officers.

A 2010 article in Police Chief Magazine, a police trade publication, explained the increased risk to officers when they are shooting at a moving target: “Shots taken at the drivers of vehicles often are not accurate and require the bullet to breach either a metal or a glass barrier. Furthermore, if a vehicle is speeding toward an officer, who has no protective cover to move to, that officer is left with limited defensive choices.”

Police also have to consider whether there are other passengers in the vehicle or bystanders who may get injured.

In Denver, Colo., the police department re-evaluated its use-of-force policies after officers shot and killed a 17-year-old teenager Jessica Hernandez in January. Officers fired at her as she tried to drive away in a stolen car, according to the Denver Post.

The Denver Police Department policy discourages officers from shooting at moving vehicles unless the suspect “poses an immediate threat of death or serious physical injury to the officer or another person,” or the officer “has no reasonable alternative course of action.” The policy suggests that officers move away from an oncoming vehicle, rather than shoot at it, since firing “may have very little impact on stopping the vehicle.”

At the Cobb County Police Department, officers are allowed to use deadly force in response to an oncoming vehicle, if they feel themselves or others are at risk of suffering bodily injury, public relations officer Sgt. Dana Pierce told Epoch Times on Wednesday.

Pierce also said that none of the Cobb County officers at the scene Tuesday fired their weapons at the car, but the department is investigating the incident. The Cobb County police were called to the scene to assist the Smyrna police, at their request.

UPDATE: This story was updated to include a response from the Cobb County Police Department.