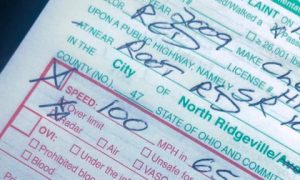 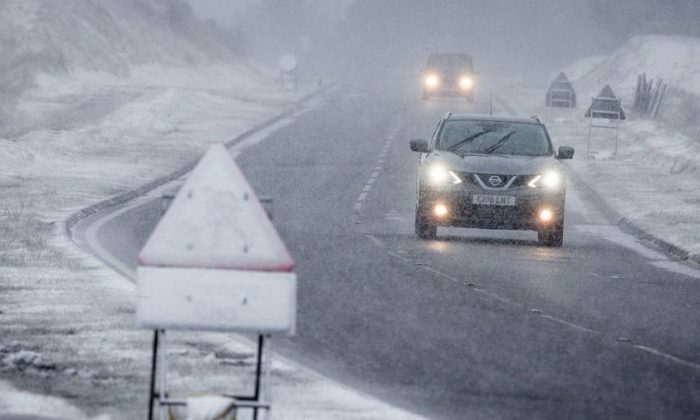 Vehicles on a road in an undated file photo. (Matt Cardy/Getty Images)
Crime and Incidents

As the polar vortex affects a large portion of the United States, police in Illinois took to Facebook to warn people not to follow the example of one driver who was caught going 115 miles per hour in a 35 mph zone.

Illinois State Police posted a portion of a ticket that was given to the female driver caught speeding.

Police said she was pulled over in Champaign on Jan. 27.

“If you think we don’t patrol in town, you’re mistaken,” Illinois State Police wrote on Facebook alongside a photo of the ticket. “And if you think you won’t get in a bad crash in town because the speed limits are low and you’re a good driver, think again. Just remember there are people like this driving next to you.”

The police then called the driver “ridiculous.” Police added later, “She was arrested and jailed last night.”

Take that in for a second.

She was caught in town last night.

If you think we don’t patrol in town, you’re mistaken. #Ridiculousness #Bananas pic.twitter.com/0KWSMoN4xT

“Please tell me this is grounds for license suspension … if not some serious fines and a few nights in a cell. This is INSANE and in my opinion criminally negligent,” said one user.

“That speed is just crazy. I’m not saying I’m perfect and follow all speed laws. But you have to respect the laws a Physics and know that road is 35 MPH for a reason,” said another.

“With the snow and slush, you can still get a speeding ticket for doing 35 in a 35. It’s called driving too fast for road conditions,” added another.

In another post on Jan. 28, the Illinois State Police said that drivers should be careful as temperatures dipped to record lows, making travel “extremely dangerous.”

Drivers should also keep an eye out for police vehicles and slow down on approach. If possible, they should stay home.

“The men and women on patrol will be facing an extra degree of risk to protect the lives of all motorists in this severe weather,” Acting Director Brendan Kelly said in a statement.

“The fewer drivers on the road, the fewer accidents, and the safer everyone will be. Please do them, and all first responders, a favor by staying home or if you must drive, do so with extra care.”

Temperatures across Illinois, including in Chicago, were expected to rapidly drop on Tuesday and Wednesday.

The high temperatures in the state were in the negatives on Wednesday afternoon, the weather service warned.

If there’s a day where one needs to demonstrate cold weather safety to the max, it is Wednesday. The Arctic air will be fully entrenched. Temperatures remain in negative double digits for most areas the entire day. Wind chills -40° to -55°. #ILwx #INwxhttps://t.co/d9uKYzeUsQ pic.twitter.com/LVAWtRidxX

“If there’s a day where one needs to demonstrate cold weather safety to the max, it is Wednesday,” the agency stated.

Winter weather safety includes wearing layers if you have to go outside, winterizing vehicles, and knowing the warning signs for hypothermia, the agency said.

For extreme wind chill, people should be aware that exposure to extreme cold can cause frostbite “in a matter of minutes.”

“Areas most prone to frostbite are uncovered skin and the extremities, such as hands and feet. Hypothermia is another threat during extreme cold. Hypothermia occurs when the body loses heat faster than it can produce,” the agency noted.

Many Chicago-area hospitals are preparing for potential influxes of patients with frostbite and hypothermia. https://t.co/Te6PZWz6B0

Gov. JB Pritzker said on Tuesday that he issued a disaster proclamation for the state.

“This storm poses a serious threat to the well-being of people around the state, and we will use every tool at our disposal to keep our residents safe,” he said in a statement.

“This disaster proclamation ensures that the state of Illinois has the flexibility to effectively and efficiently respond to the needs of local governments during this extreme weather event.”

Schools in some areas, including Chicago, were set to be closed on Wednesday.