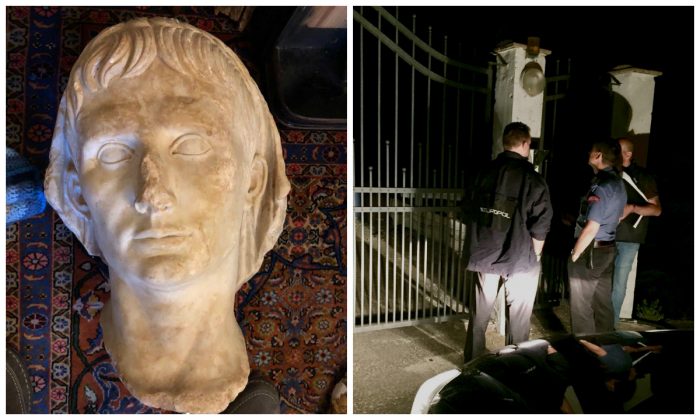 Police seized 23,000 cultural artifacts valued at a total of $47 million in their crackdown of an illegal trafficking operation, on July 4, 2018. (Europol)
Europe

Police seized over 25,000 ancient relics worth $47 million (40 million euros) on Wednesday in an investigation to crack down on illegal trafficking of cultural goods, in what is considered one of the largest crimes of its kind in Italian history.

The investigation into the highly organized criminal group behind the illegal trafficking began four years ago, by specialized units in the Italian Carabinieri, and supported by similar specialized units of the Spanish Guardia Civil, the British Metropolitan Police, and the German LKA of Baden-Württemberg.

Before the predawn raid, the Italian Carabinieri had already seized 3,000 archaeological goods and 1,200 fake archaeological items altogether worth at least another $47 million. They also confiscated 1,500 tools, including metal detectors.

Police found the criminal gang had been operating from several European member states, and were illegally excavating and trafficking in cultural goods. They believe the gang members had been illegally excavating artefacts in the Caltanisetta district in central Sicily, known for its wealth of archaeological sites from ancient Greek and Roman periods.

From there, members would smuggle the valuable items out of Italy with false documents, and organize the items to be sold through auction houses in Germany. Key gang members from Barcelona and London were also coordinating the supply chain and providing technical support.

Euronews reported that Maj. Luigi Mancuso of the Carabinieri paramilitary art squad in Palermo, Italy, said on Wednesday that investigators believe the excavations were commissioned by a London art dealer, William Veres, 64. Verse has since been served with an international warrant.

Europol had been actively supporting the successful operation, by financing the main raid and prior operational meetings, as well as coordinating synchronized efforts on the main day.

Don’t mess with our heritage! @_Carabinieri_, @metpoliceuk, @guardiacivil & the #LKA have dismantled with the support of Europol an organised crime group trafficking illegally excavated artefacts from Italy. Over 25 000 items seized worth €40 million https://t.co/S4yPyGYaS9 pic.twitter.com/zkVRzQTxAN

“International cooperation is key to the success of such investigations in the field of trafficking of cultural goods, in which artefacts are moved through several EU countries and levels before they are brought to the legal market,” Europol said in a press release.