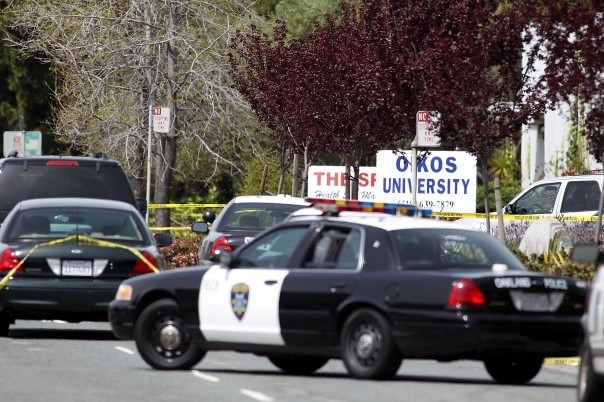 Police secure the scene at Oikos University after a shooting that killed multiple people on April 2, in Oakland, Calif. According to the Oakland Police Department, the shooting suspect is in custody. (Jed Jacobsohn/Getty Images)
US

The suspect, One L. Goh, surrendered to police about five miles from the shooting on April 2, according to Chief of Police Howard A. Jordan. He spoke at a press conference, which Sgt. Christopher Bolton summarized and distributed on Twitter.

Jordan said a total of 10 people were shot. Police received multiple emergency calls beginning at 10:33 a.m. PDT. They arrived at the school, believing the shooter was present and that victims were locked inside, and entered a building by breaking a window. Police evacuated 13 people, some of whom were critically injured, “amidst an extremely chaotic scene.”

“We’ve learned that this was a very chaotic, calculated, and determined gentleman that came there with a very specific intent to kill people, and that’s what his motive was, and that’s what he carried out,” Jordan said on Good Morning America on Tuesday.

According to the Oakland Police, 43-year-old Goh had been a nursing student at Oikos University but was expelled months ago. He is a native of South Korea and a naturalized American citizen.

The San Francisco Chronicle reported that Goh came to the school looking for a particular administrator. The Chronicle said Goh felt disrespected by other students, and quoted Jordan at a press conference on Tuesday saying Goh was angry “because of the way he was treated when he was enrolled here a few months ago.” The suspect was expelled “for his behavioral problems” and for issues relating to “anger management,” according to Jordan.

“The events in California are a reminder to all of us that violence can occur anywhere, and our schools can be particularly vulnerable targets for perpetrators seeking to act out their rage,” said Daniel J. Flannery, PhD. He is a professor at Case Western Reserve University, and director of the Begun Center for Violence Prevention, Research, and Education in the Mandel School of Applied Social Sciences.

“While schools are still very safe places overall compared to rates of violence in the community, persons who are angry, with access to firearms, sometimes choose to act out with tragic consequences. There are many factors related to why and how this happens, as summarized by the Safe School Initiative (2002) study of school shooters conducted by the U.S. Department of Education and the U.S. Secret Service. Shootings on school grounds are occurring more frequently in the United States than in other countries, but there have been incidents like this in many other countries around the world,” said Flannery in an email.

Oikos University is a small, private, Christian vocational college with a curriculum in music, theology, Asian medicine, and vocational nursing. Its founder and president Jongin Kim is from Korea. The school is aimed at Korean and other international students.

All classes are canceled until further notice, according to a statement from the school. The tragedy was shocking and senseless, said Jordan. “Our hearts and prayers go out to the victims, their families, and their friends; I offer my deepest condolences. No words can express the gravity of these crimes and the pain caused by them.”

California Gov. Jerry Brown said in a statement, “The tragic loss of life at Oikos University today is shocking and sad. Our thoughts and prayers go out to the victims, their families and friends, and the entire community affected by this senseless act of violence.”